Three of my favorite aviation legends

As everyone knows, the Reno Air Races, held each year in September, is a gathering of veteran aircraft and the elite pilots of the ages! When Dick Rutan sent this photo to me this year, my mind started racing with memories of these great men of aviation. I must confess that the HU-16 Albatross in the background stirred recollections of times with my husband, Al Hansen, too.

Everyone recognizes Clay Lacy's name and connects it with Lacy Aviation, LearJets and Van Nuys Airport. When I think of Clay, I see his purple P-51 Mustang, dubbed the "Purple People Eater;" his DC-7 "Super Snoopy;" the DC-8 with the Human Fly on top and the 'Pregnant Guppy" of Aero Spacelines. It was two C-97's, also known as the Boeing 377 Stratoliner, placed together, one fuselage on top of the other. This aircraft was powered by four Pratt & Whitney R-4360 28-cylinder radial engines.

I worked at the air races in Mojave and I remember Clay telling me that he was going to take the DC-7 around the pylons and he would look for me by the pylon out by where the boneyard is now. He was so low that the props were creating little whirlwinds on the ground. I was jumping up and down and screaming. I saw a photographer dive to the ground as Clay flew over us. I swear I could see Clay's fantastic smile in that cockpit! It was a great day to be under four roaring Wright R-3350 radial engines!

There is so much to tell about this decorated fighter pilot who flew 105 combat missions in F-100s with the Misty's in North Vietnam, flew as command pilot around the world, unrefueled, non-stop in Voyager in 1986 with Jeana Yeager, set numerous flight records in his homebuilt Long-EZ, is a fantastic motivational speaker and flew around the world again with his good friend Mike Melvill in the Long-EZ's that they built side by side, in the EAA (Experimental Aircraft Association) Friendship Tour.

The EAA Friendship Tour began when Mike told Dick that he wanted to fly his own homebuilt airplane to his hometown in Johannesburg, South Africa.

Mike asked Dick if he would like to fly along in formation. Dick's replay was, "That's half way around the world – why don't we go on around the whole world!"

There are many Experimental Aircraft Association (EAA) chapters around the world, so the trip quickly became a tour from one EAA chapter to another.

They had to plan a route that would be doable for their little homebuilts. Finding the shortest route across the Atlantic posed a problem, but they finally agreed on a route.

They departed Mojave on April 4, 1997 and headed east. They crossed all the world's oceans, visited 14 countries, traveled more than one and a half times the distance of the equator. They returned home to Mojave on June 24.

Mike painted names of all the places they visited on this remarkable flight, the date that they left Mojave and the date they returned.

Bud would often come to Mojave Airport with his friend Chuck Yeager, to visit Dan Sabovich (East Kern Airport District's founding General Manager). Bud and Chuck enjoyed hunting on the Hansen Wilderness Ranch. He was a friend of my late husband, Al Hansen, as well.

During World War II, while serving with the363rd Fighter Squadron, 354th Fighter Group in the 9th Air Force, Bud Anderson flew 116 combat missions (480 hrs) in a P-51 Mustang carrying the name of "Old Crow." He destroyed 16 and 1/4 enemy aircraft in aerial combat and another one on the ground. Bud has the distinction of being a "Triple Ace."

He learned to fly at age 19 gaining his private pilot's license in 1941 through the Civilian Pilot Training Program while attending college.

In Jan. 1942 he entered the U.S. Army Aviation Cadet Program receiving his wings and commission in Sept 1942. He received his test pilot training by completing the AMC Performance Course (1948) and the Stability and Control Course (1949) while at Wright-Patterson AFB Ohio.

During his 30 years of distinguished military service, Colonel Anderson accumulated over 6,700 flying hours. He served as a fighter test pilot and Chief of Fighter Operations at Wright Patterson Air Force Base in Dayton, Ohio. He participated in a number of unique test programs, including the wingtip coupling experiments and the parasite fighter program. While at the Air Force Flight Test Center at Edwards Air Force Base, he was assigned as Chief of Flight Test Operations and later Deputy Director of Flight Test.

Following military retirement in 1972, he joined the McDonnell Aircraft Company as their facilities manager at Edwards AFB. He retired from McDonnell in 1984 and moved to Auburn, California.

I like this quote in the foreword of Bud's book, "To Fly and Fight" by Brigadier General Chuck Yeager: "In an airplane, the guy was a mongoose. It's hard to believe, if the only Bud Anderson you ever knew was the one on the ground. Calm, gentlemanly. A grandfather. Funny. An all-around nice guy. But once you get him in an airplane, he's vicious. Shot down 17 airplanes. Best fighter pilot I've ever seen. He's also the best friend I have in the world. We go back 47 years, Andy and I." 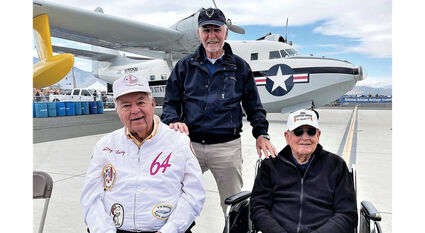 I used to sit with my husband and remind him how lucky we have been to know so many wonderful aviation legends. We were always so thankful to meet up with these great friends.