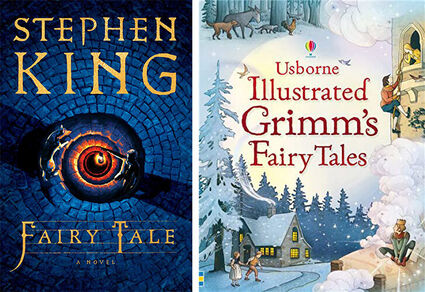 What activities did you use to wile away the long days of pandemic seclusion? I heard about a lot of bread making. Families dusted off board games and caught up on G-rated movies. Some people indulged in binge watching cable series they hadn’t had time for during busier schedules. Others got out their knitting needles and finally used their accumulated yarn stashes, making stacks of sweaters for their families, friends, pets and strangers. For singles, books were taken from the “someday I will read these” piles, while passing through long quiet days and nights without human contact. What did a most prolific and renowned author do during big blocks of empty time? He decided to write a fairy tale.

Not knowing that this author is Stephen King, your mind might have wandered through forests of sweet fairies and lost maidens. But Stephen King? Does one think immediately terror and gore? King says that he was excited to do something different as he embarked to carve out his newest book “Fairy Tales” to the delight of himself.

The main character, Charlie, is 17. He loves football, baseball and tolerates school. His home life is sad with no mom and an alcoholic dad. Charlie has a chance meeting one day with a dog, Radar, who leads him to his master, Howard Bowditch. Howard is a grouchy old man who is hiding a secret in a locked shed behind his house. Charlie finds out that secret when Howard dies.

Unlocking the shed releases Stephen King’s vivid and quirky ideas that answers the question he asked of himself during the pandemic: “What could you write that would make you happy?” Of course his answer was unique and instinctively expansive. King has shared, “As if my imagination had been waiting for the question to be asked, I saw a vast deserted city – deserted but alive. I saw empty streets, the haunted buildings. A gargoyle head lying in the street. I saw smashed statues (of what I didn’t know, but eventually found out). I saw a huge sprawling palace with glass towers so high their tips pierced the clouds. These images released the story that I wanted to tell.”

Does this description bring you visions of Oz? Of Jack and the Beanstalk? Do you instantly feel some kind of monster is lurking in the shadows of the destruction? That a battle was lost and yet another battle is coming? King invites you to get his new book and find out.

As for other fairy tales, if you want to warm up for the King experience, you might want to check out the Usborne “Illustrated Grimm’s Fairy Tales.” The Grimm brothers, Jacob and Wilhelm, were German researchers who traveled through many towns and villages gathering a collection of spoken tales and folklore. The stories that they found, most already centuries old, have endured another several hundred years, surviving evolutions of technology and revolutions of war. Familiar stories like Cinderella, Hansel and Gretel, Sleeping Beauty and Snow White. But beware, these stories did not begin as we know them today.

In their original form, some are as scary and horrific as a Stephen King story. Did you know that Little Red Riding Hood was actually eaten by the wolf? That was a lesson for children of the day not to stray into forests alone. Did you know that in order for the king to save the life of a loyal servant, he needed to chop off the heads of his two children Hansel and Gretel? No wonder they found running into the forest and staying in an isolated cottage with a witch a better choice than staying at home!

Some have said that fairy tales were originally not for the weak of heart or for children. Through the years society has watered down the stories and tempered many of the more horrendous endings. And as such, we have happily shared them with our children, generation after generation, as entertainment rather than graphic learning tools. And fortunately, today’s children seem to have a better grip on separating reality from make believe. The question is, can adults? Stephen King’s “Fairy Tale” as his other stories, have never been for those deathly afraid of the dark or easily scared.

We are entering the Fall of this year. Before no time the streets will be scattered with leaves and we will be carving funny to gruesome smiles into pumpkins. From child to adult, costumes will transform many, both into lovely and terrifying beings. You still have time to get into the mood and prepare yourself with a good run of tales that actually have no fairies in them at all.