Ancient Bristlecones: a mountain pilgrimage to the oldest living trees 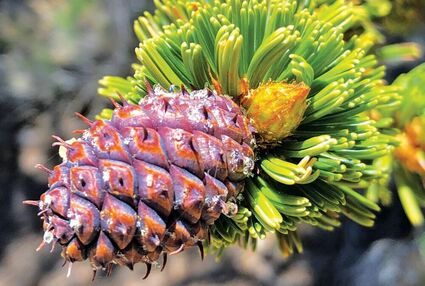 A purple Great Basin Bristlecone Pine cone shows the bristles for which the tree is named. The densely-packed needles can stay on the tree for up to 40 years.

High up in the White Mountains, about 200 miles northeast of Tehachapi, there is a place unlike any other in the world. It is the Ancient Bristlecone Pine Forest, and some of the living trees there are more than 4,000 years old.

This surreal place is part of the Inyo National Forest, and is home to the oldest living trees in the world, the Great Basin Bristlecone Pines (Pinus longaeva). California is the most conifer-rich place on Earth, with 52 different species of cone-bearing trees, including the world's tallest trees, the Coast Redwoods, as well as the most massive trees, the Giant Sequoias. Even the rarest pines in North America, the Torrey Pines, whose entire population consists of only about 10,000 trees, lives in California.

Living in Tehachapi means that we are within a day’s drive of all of these remarkable trees. The Ancient Bristlecone Pine Forest is located in the high arid mountains outside the little Owens Valley town of Big Pine, which is about a two and one-half hour drive from Tehachapi.

If you visit the beautiful visitors center there, you might see a familiar face and hear a familiar voice: George Novinger, the principal of Tehachapi High School from 1982 to 1992 and one of the founders of The Apple Shed, appears in an interesting and informative video that is shown there.

George, who passed away at 89 in February, worked as a ranger in the Ancient Bristlecone Pine Forest for nearly 20 years, and he delighted in spending his summers there at 10,000 feet, teaching visitors about the wonders of the craggy trees. With his knowledge about Great Basin Bristlecones and his authoritative voice and bearing, he was a natural choice to be included in the short film. His voice can also be heard in some recordings that accompany displays at the visitors center.

And George wasn’t the only Tehachapi connection to the Ancient Bristlecones: his granddaughter, Saya, also worked there as a naturalist-interpreter, and he was assisted by his wife, Anne Marie, who would bring him his lunch each day and also volunteered in the visitors center in the afternoons. The late Jacobsen Junior High School teacher Patty Wells was the first Tehachapi teacher to work there, and so did Tehachapi High chemistry teacher Lauren Hollen.

Anne Marie also wrote the text for many of the interpretive signs that are found around the visitors center and on the Discovery Trail, a one-mile trail that explores a portion of Schulman Grove, starting and ending at the visitors center.

Bristlecones get their name from the sharp bristles on their cones. The trees have dense clusters of short needles in bundles of five that surround the stems and branches, giving them an almost bottle brush appearance. While the needles on most pine species remain on a tree for 4-6 years, Great Basin Bristlecone Pine needles stay on the tree, green and living, for up to 40 years.

While most trees benefit from living in hospitable environments, Great Basin Bristlecone Pines persist and endure with little competition because they grow in such inhospitable locations. They most commonly grow in dolomite soil, a type of pale limestone soil that is very alkaline and is the source of the name White Mountains. Few plants can grow in this harsh substrate, but bristlecone trees have managed to adapt.

The soil around these ancient trees is rocky and there is very little undergrowth, so bristlecones are seldom threatened by fire – there is simply not enough vegetation to sustain a wildfire. If a tree is unlucky enough to get struck by lightning and ignite, the fire doesn’t spread to any of its neighbors.

Bristlecones form growth rings of alternating light and dark bands, like other trees, though these bands are very narrow due to their extremely slow growth and short growing season – as short as six weeks in some years. Bristlecones only gain about an inch of trunk diameter per century.

Taking core samples using a tool called an increment borer, dendrochronologists (tree dating experts) like Dr. Edmund Schulman and those who followed him not only established the incredible age of Great Basin Bristlecones, but this information was also used to correct and recalibrate the radiocarbon (carbon-14) dating process. Great Basin Bristlecones became a living archive of weather patterns and climate, and coupled with information from dead trees that died but didn’t rot, a timeline of about 10,000 years was established.

I highly recommend putting a trip to the Ancient Bristlecone Pine Forest on your to-do list. It’s an unforgettable, timeless place, like a dreamscape of stark slopes with twisting, weathered bristlecone trunks, in beautiful tawny hues, emerging from the light, rocky soil and raising their bright green needles to the blue blue sky.

A song by Hugh Prestwood called Bristlecone Pine describes them well: “Way up in the mountains, On the high timberline, Lives a twisted old tree, Called the bristlecone pine. The wind there is bitter, It cuts like a knife, And it keeps that tree holding, On for dear life. But hold on it does, Standing its ground, Standing as empires, Rise and fall down. . .” 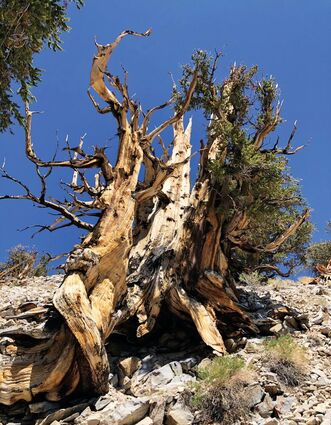 Even when portions of a bristlecone tree dies, the rest of the tree can continue to live for many centuries.