Joan Johnson: a Mother's Day remembrance of a wonderful lady 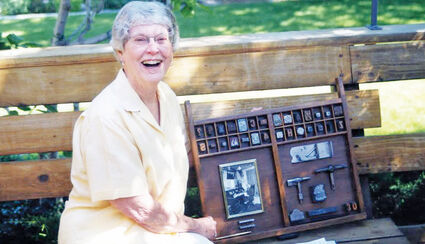 Joan Johnson in the backyard of her Tehachapi home with a shadow box she made from an old type drawer.

Since this is The Loop's Mother's Day issue, I decided that I would honor an amazing lady who was a devoted mother and raised her own two children here in Tehachapi, but she also provided motherly support and was a role model to countless other local kids. Her name was Joan Johnson.

Joan (pronounced jo-anne) was married for 67 years to Tehachapi boy Dick Johnson, whose father Walter published the Tehachapi News for many years. Joan helped at the family business for decades, since Walter later sold the paper to his sons Dick and Warren, who published it for many years until becoming partners with Bill and Betty Mead around 1968. The Meads later bought the newspaper from the Johnsons.

Joan was one of the reasons that I grew up interested in community journalism, and took up writing. Joan wrote a highly popular weekly column for the Tehachapi News called “Over the Back Fence” from 1953 to 1973. It was written in the first person, and was a series of observations, anecdotes about small-town life, and short profiles of local people and their activities. I loved reading it, though I was a little kid at the time, and I thought it would be a fun adventure to write about my beloved hometown. I’ve been doing that for 41 years now, and I enjoy it more than ever.

Joan was a familiar and well-loved figure around Tehachapi, for she was a truly rare and incredibly gracious person. She had the kind of manners that transcended culture, class or background -- she could make anyone feel comfortable and at ease as she radiated cheerfulness, respect and genuine kindness. She wasn’t cosmopolitan or worldly, she was a small-town girl to her core, but she had a sunny dignity and sense of grace that could carry her through nearly any occasion.

Anyone who was lucky enough to be in Joan’s large circle of friends and family would receive cards written in her clear, angular script, offering a thank you, or sympathy in times of distress, or just some words of encouragement.

She also had a wonderful way of conducting phone calls: she’d say what she had to say, listen to what you had to say, and then quickly wrap things up. “Come see Mother Johnson when you have a chance” she’d say, then cheerily end the call.

One of Joan’s favorite sayings is one that we could all stand to have etched in our consciousness: “There’s never a wrong time to do the right thing.” Joan didn’t just say it, she lived it, and she brightened so many lives, so many times with her kind gestures like an upbeat visit, a cheering phone call, dropping off a home-cooked meal in times of illness or grieving, her cards, etc. She was the epitome of “small town community” that people cherish about a place like Tehachapi.

But you can’t describe Joan Johnson’s personality without mentioning her amazing sense of humor. If you were at a gathering where Joan was present, you’d try to get a seat next to her, or at least at the same table, because you know you’d be in for some funny conversations.

And best of all, Joan’s humor was not at someone else’s expense; she would be devastated if she ever hurt a person’s feelings. No, her humor was the affectionate, lightly teasing, non-profane kind, with rapid-fire delivery. She was great friends with Dick’s sister Margie Finley, also a quick wit, and listening to the two of them chatting was guaranteed to supply some laughs.

When my Ma was going to Peru for a couple of weeks to assist on an archeological dig with Antelope Valley College professor Roger Robinson, Joan’s parting words to her was the quip “Have fun Wini, and don’t dig up anything you wouldn’t be proud to bring home!”

Joan began her life in Clifton, Tenn., where she was born on April 6, 1930. She was youngest of four children born to Charles and Bertha Peacock. Not only was Joan the baby, she was 12 years younger than her nearest sibling — one of those later births that life doles out to the unsuspecting.

Joan was raised in Delano, where her father was one of the town’s main barbers. After graduating from high school, Joan attended Bakersfield College, and it was there in a psychology class that she met that Tehachapi boy named Dick Johnson, and neither of their lives would ever be the same.

They married in August of 1949 and moved to Tehachapi, and Joan spent the next nearly seven decades as a helpful resident. She contributed 40 years of volunteering at the Guild of Tehachapi Hospital thrift store and supported numerous different community endeavors, including serving on Main Street Tehachapi’s historic murals committee.

On top of all that, she was very bright and talented, could type extremely fast and read and write shorthand. She was also good with her hands, and she refinished nearly every piece of wood furniture in their house, often restoring neglected yard sale pieces into beautiful furniture.

Joan passed away at 87 in 2017, only a few months after her cherished husband and lifemate. Like all those who knew her, I’m grateful to have had her in my life, for she set a wonderful example as a woman, a mother and friend to Tehachapi. Much love to her and the other nurturing mothers who have made our lives possible.

Joan at a surprise birthday party held for her.