Phyllis Belcher – a woman of substance 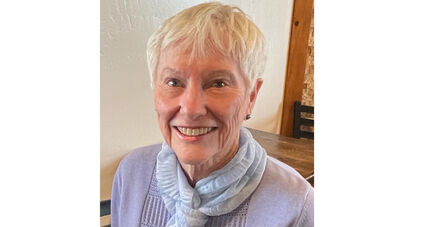 "True beauty in a woman is reflected in her soul." – Audrey Hepburn

Before writing this I asked a friend if she knew Phyllis Belcher. She replied, "Phyllis is a true lady through and through." After meeting Phylis I knew why she deserved such a high compliment. "A lady through and through" isn't all. Phyllis exudes a joie de vivre that is contagious. She has that "je ne sais quoi" so many of us strive for. It comes naturally to Phyllis. Being in her presence was like a breath of fresh air. I had a smile on my face the whole interview. If you are lucky, you know someone who makes you feel happier just by being around them. And if you know Phyllis Belcher you are very lucky.

"Elegance is when the inside is as beautiful as the outside." – Coco Chanel

Phyllis Belcher – a woman of substance

Phyllis Belcher was born in Verden, Nebraska, a little town that she says no longer exists. Phyllis explained that Verden was a little farm town. When wealthier people came in and bought up the farms, the original occupants left and the little farms disappeared. According to Google, as of 2022, Verden has a population of 155. Small towns are nothing new to Phyllis.

She was raised in a family of 14 children. When Phyllis was 2 years old her family moved to Needles, California, where they lived for 7 years before relocating to El Monte. This was where Phyllis grew up. Phyllis remembers the thing she loved most about her early years was reading. She skipped the fifth grade and went on to the "big school." Phyllis loved school and she loved reading.

"I read everyday on my lunch hour all the way through high school," Phyllis said. Her favorites are historical fiction by James Michener and anything written by Doris Kearns Goodwin. Because she so loved school, she went on to college and became a teacher. She taught kindergarten, first, second and third grade. But, Phyllis says kindergarten was always her favorite.

Phyllis married young. She has one daughter, two granddaughters and two great grandchildren. After her first husband died, she later remarried someone from the University of La Verne where she was enrolled. They were together for 40 years. He passed in 2005. Phyllis has fond memories of their time together. She said they loved to travel and visited a lot of places. With the university, they took numerous trips to Mexico, Malaysia and Singapore. Now she has a friend with whom she travels, and together they have enjoyed Ireland, England, Scotland and Wales. She has also visited all the presidential libraries

"There are official libraries of presidents since Hoover, and also the presidential homes. I've seen all of them," she said.

In 1967, Phyllis and her husband had been married two years. They were living in her brother's house in Pomona while he was working overseas. When her brother returned home they had to move. A classmate of her husband's was the principal of a school in Tehachapi. He told Phyllis they would love Tehachapi and hired her and her husband. Phyllis remembers they came through Monolith. She said she had no idea where they were going.

"We signed our contract before we came. I remember there were no trees and the first person I met was 'Gypsy Joe.' He was an old sheep herder. I never heard him speak and I don't think he spoke English. I remember the kids were afraid of him whenever they saw him in town," Phyllis said. "The second person I met was the chief of police. He was very gracious but the next month he was shot and killed. My first impression of Tehachapi was, 'What have we gotten into?!'"

Phyllis learned to love Tehachapi. She said she found places she could serve and things she could do.

"There were so many more opportunities than in a big city where I didn't feel I was good enough, but Tehachapi welcomed me with open arms," said Phyllis.

For instance, she had always loved music but was reluctant to play in the larger town where they had lived. In Tehachapi she played the organ at church, was welcomed with her cello in the Tehachapi orchestra that later expanded into the symphony, and has been with them for twenty years. She served as branch president of American Association of University Women for three years, and was a part of the BeeKay Theatre. Phyllis remembers how exciting it was having fittings for costumes. Her favorite play was "The Miracle Worker." She has been a member at large with the BeeKay for many years. In addition, Phyllis was a docent at the Tehachapi Historical Society and the Erera House Museum.

Her husband started the Democratic Club in 1980 and Phyllis was, of course, a part of the group.

"You name it, I've done it. When my daughter was 7 years old we talked about leaving Tehachapi. My daughter said, 'Mom, you can go but I'm staying here.' It turned out that we didn't move, and the longer we stayed the more we liked it," she said.

When asked what advice she would give to others, Phyllis said, "Try new things. Stretch yourself and give it all. Realize that if you put your mind to something, you can do it." That's exactly what Phyllis has done. There is a joy of life all over her. She says she has been very fortunate and that she appreciates everything around her. Now in her sunset years, she is doing things she wants to do like playing bridge, learning the ukulele and meditation. Hats off to you, Phyllis. We know how much you love Tehachapi, but Tehachapi also loves you.

Expressive arts ideas from around the world:

Remember creative expression is the way we live our lives. It's the way we choose to dress, decorate our homes, celebrate our loved ones, set the table or arrange a bouquet of flowers. And as Matisse says, "Art should be something like a good armchair in which to rest from physical fatigue."

1. "Shinrin-yoku" known as forest bathing, is a Japanese way of reconnecting with one's soul by escaping the city and technology into nature.

2. "Ho'oponopono" is a Hawaiian warning against acting rashly when wronged by someone, taking time to address things calmly through deep breathing, considering perspectives and working toward forgiveness.

3. "Friluftsliv" is a Norwegian reminder to go outside and spend time outdoors soaking up the daylight and appreciating the rhythms of the world.

4. "Gemutlichkeit" is a German way of celebrating togetherness over a frothy beer with some song and dance.

5. "Siesta," cultivated in Spain, is a reminder of the benefit taking a nap can provide.

6. "Aperitif" is a small way to celebrate the end of the work day in France with a snack and drink.

7. Mate-tea" drinking in South America is a form of connecting with friends.

8. In Bosnia and Herzegovina having a slow coffee break in the morning, brewed in special pots and served with candy, symbolizes the need to start the day right.

9. "Ubuntu" in Nigeria is about putting community first.

"The Wisdom Keepers, Tehachapi Women of Substance and a Few Good Men" is a book in progress by Judith Campanaro, Tehachapi artist and resident. Judith's love of sharing inspirational stories of others prompted her to highlight amazing locals that make Tehachapi special. The Loop newspaper will feature excerpts from the book to give you a taste of our fabulous residents. If you would like a copy, please contact Judith at judithcampanaro@gmail.com. In the meantime if you'd like to recommend a local person for an interview send their name and number to Judith at judithcampanaro@gmail.com or (646) 896-4434. She will contact them.