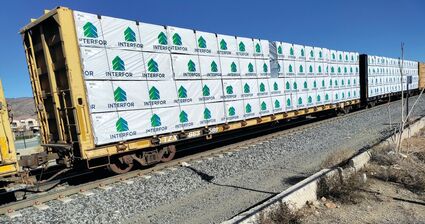 Lumber trains pass through Tehachapi on a regular basis headed from the northwest, Oregon and Washington, for various purposes. Centerbeam cars are used to transport lumber and other wood products used to build our walls, doors, roofs and floors. One centerbeam rail car can carry enough framing lumber to build about six homes. Most standard centerbeam rail cars are 73 feet long and can carry 200,000 pounds. BNSF has some centerbeams that are 81 feet long and can carry 216,000 pounds.

We all know lumber is used to build our homes, the furniture inside them and the fences around our yard. Railroads play a major role in moving essential construction materials, like lumber and wallboard, from origin to its destination. U.S. railroads shipped more than 416,000 carloads of lumber and wood products in 2019, according to the Association of American Railroads.

A centerbeam is designed to ship bundled goods like lumber, plywood, wallboard, fence posts and other building supplies. Some materials are wrapped in plastic for protection from weather and other materials, like long boards, are left open to the weather.

A centerbeam is a flatcar that has a "center beam," or longitudinal I-beam, that reinforces the center of gravity and allows products to be secured in place on either side.

Centerbeam flatcars, centerbeams, center partition railcar, or "lumber racks" are specialty cars designed for carrying bundled building supplies. They are essentially bulkhead flatcars that have been reinforced by a longitudinal I-beam, often in the form of a Vierendeel truss, sometimes reinforced by diagonal members, but originally in the form of stressed panels perforated by panel-lightening "opera windows", either oval-shaped or egg-shaped.

A centerbeam rail car must be loaded and unloaded symmetrically to distribute the weight of the shipment across the car. To prevent the car from leaning or tipping over, it is important to load and unload from both sides simultaneously, usually with the help of forklifts. An added bonus of loading and unloading from both sides allows for quicker turnaround, allowing the product to get to the end user faster and gets the rail car back in service faster.

Centerbeams allow shippers to move a large amount of freight at one time. They provide a more efficient and cost-effective shipping option compared to truck. In fact, a single train can carry as much freight as 300 trucks. On average, railroads are three to four times more fuel efficient than trucks, with a single train removing several hundred trucks from the nation's congested highways

Quite often, timber companies constructed their mills near or beside the railroads since they offer the most economical means of unloading raw logs for production. Additionally, these usually connected to a larger, main line railroad, in transporting finished products to market.