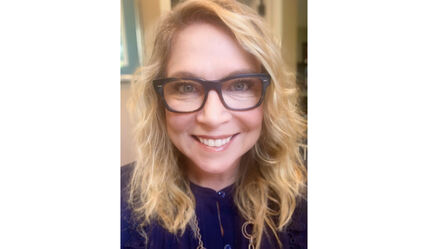 Originally from the beautiful foothill community of Sonora, California, English Professor Debilyn Kinzler is very excited about her new position at Cerro Coso working for the English and Foreign Language Department.

A self-confessed "college dropout" Debilyn says she got serious about college when her second daughter was 17 and applying for colleges, she asked Debilyn, "When you were little, what did you want to be?" Debilyn replied "a college professor." "You know you still can, don't you?" said her daughter. Inspired by her daughter's confidence in her, Debilyn enrolled in Los Angeles Pierce College, and then transferred to Cal State Northridge where she earned her Bachelor's Degree.

"I often say that it took me 25 years to graduate with a four-year degree but what I learned from doing it this way is that it's never too late to continue learning."

Debilyn now holds an Associate of Arts in Business Administration from Los Angeles Pierce College, a Bachelor's Degree in Creative Writing from Cal State Northridge, a Master's Degree in English Literature from Cal State Northridge and currently a Doctoral student of English Literature with a concentration in American Studies from Claremont Graduate University.

"After I completed my Master's," said Debilyn "I knew I wanted to give back to the community that helped me, so I returned to the community college environment as an adjunct instructor at a variety of schools: Ventura College, Santa Barbara College, Santa Monica College, and finally Bakersfield College. At BC, I connected with the mission and student-centered approach of the schools within the Kern Community College District and was thrilled at the opportunity afforded by Cerro Coso. Plus, my affinity for the Ridgecrest community after years of coming to the Indian Wells Valley to enjoy the endless off-road trails made the decision to come to Cerro Coso a no-brainer and I am thrilled that the Cerro Coso community is my new forever home."

Debilyn has been married to husband Steven for 31 years and together they have two daughters, two sons, four dogs, two turtles, and two snakes. She loves the outdoors, camping, hiking, dirt bike riding, though her off-road vehicle has four wheels, while the rest of family's have two.

Congratulations to Debilyn on making her dreams of being a college professor come true!

Cerro Coso thrilled to welcome Debilyn to the CCCC family.