The newly unveiled Avenue of the Flags.

On Dec. 8, the Bakersfield National Cemetery Support Committee unveiled the Avenue of the Flags, 44 new American flags and flagpoles lining the gently curving road leading to the Upper Assembly Area of the cemetery and also sweeping down away from it. It's a graceful circular drive, lined with stately and gorgeous ceremonial flags.

Dick Taylor, president of the Support Committee, stood in front of five rather impressive military branch insignia pillars and addressed those gathered including Kern County District 2 Supervisor Zack Scrivner, District Attorney Cynthia Zimmer, a representative from Senator Kevin McCarthy's office, and several donors, volunteers, committee members and other supporters of the project. Taylor thanked everyone for making the event possible. He took a moment to specifically mention committee member Janice Hagen Armstrong, "painfully missing [at the unveiling], who passed away five days after the concrete was poured for the bases of the flagpoles."

Taylor offered a brief history of the project. Twelve years ago, the idea was conceived, "to create an avenue of flags to be raised on patriotic holidays like the Fourth of July, Presidents Day, Memorial Day, veterans Day and so forth." Those working "at the cemetery went through a number of some bureaucratic roadblocks ... at the higher level." Finally, they received some guidance that "as long as the contributions [stayed] below a certain level" they could get approval. After that, said Taylor, "It was like a snowball going downhill. Everything just started to get done."

They started with augering the holes for the flagpoles. They wanted them to alternate across the roadway in such a way, "That if you were to look [at them] from any angle, even at the burial fields where the headstones lie, ... it still [would look] phenomenal."

All 44 concrete flagpole bases were poured on Saturday, Nov. 13. No one involved in the project had ever done 44 in a single day. Taylor said they were all "thinking if you get them up at the wrong angle, it's going to be out there for God and everybody to see once that concrete sets up." But the results speak for themselves. As Taylor put it, "Lo and behold, everything was even and turned out great!"

Taylor heartily thanked Cemetery Director Cindy Van Biber and Tim Portonova and his crew. He also specifically thanked Escobar Construction, who donated the gravel at the bottom of each pole for a drainage base. He went on to thank the guys from Tejon Ranch who donated 500 acres to the cemetery. "The truth is," Taylor said, "we could not have done this without a whole lot of people."

Radiating pride and gratitude, Taylor said, "It's so rewarding to look out and see the Avenue of the Flags. And it's even better than we thought [it would be] because you can see these flags from multiple locations [on the cemetery grounds] because of the 20 foot height" of the flagpoles.

When committee board member, Larry Gillette spoke, he said, "this has been ... long [and] arduous." He thanked the National Cemetery and the company that did the gravel. He also thanked the Bakersfield Freedom Riders, American Legion Riders, and the Patriot Guard Riders. He closed by thanking everybody involved. "This is a big deal."

Cemetery Directory and US Army veteran Cindy Van Biber also took a brief turn at the podium, thanking the many people who supported the project and admiring the results.

As Taylor said in his introduction, it's important to always bear in mind, "the educational element - teaching our children the importance of honoring our veterans, respecting our military and continuing the legacy of what ... this hallowed ground is all about." 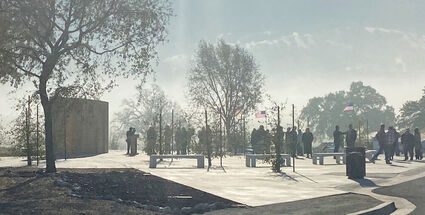 A sunbeam pierces the fog on the Upper Assembly Area at the unveiling of the Avenue of the Flags.

The Upper Assembly Area is a solemn, elevated spot where five pillars representing the five military branches have been erected as if to keep watch over the cemetery below. It is accented with stately oak trees, giant boulders and gently rolling hills. The views are breathtaking and there is a feeling of such dignity and magnificence pervading the space that it is perfectly suited to be the final resting place of the numerous veterans and their spouses interred there, including many from Tehachapi. The newly unveiled Avenue of the Flags only adds to the quiet grandeur of this beautiful place.