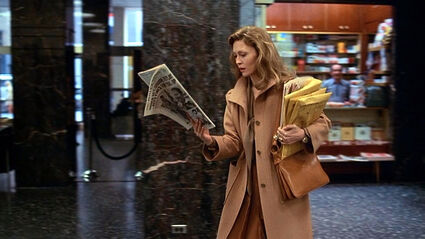 After living through the past few elections, this film seems prophetic. In preparation for this year's Thanksgiving rant from your weird uncle, I recommend watching Network (1976, directed by Sidney Lumet).

Howard Biel (Peter Finch) is a washed up news anchor who, after being told he'll be taken off the air, has a mental breakdown on live television. Instead of getting him banned from TV, a young up and coming producer Diana (Faye Dunaway) and Howard's best friend and producer Max (William Holden) get him his own show on the network.

You can tell by the way many of the scenes are structured that the film was originally a stage play, which isn't a complaint. The dialogue is clever and very enjoyable to listen to. The characters are despicable and you like them for it. The script is phenomenal. There's a reason it won an Academy Award for best screenplay, along with three other acting Oscars that year. Peter Finch's unhinged anchor is perfection. Along with Faye Dunaway's performance as the corporate ladder climbing upstart.

In the film, Howard and Max were some of the first television broadcasters. Their generation shaped TV to what it is, but Diana's generation never knew a world without TV. Her ideas aren't contained by the confines of what TV and news is "supposed to be" and so, she pushes the envelope with the programming she creates. I can see how some could point to millennials, who overwhelmingly control content creation on most online outlets like YouTube and Facebook (which have changed the landscape of news and entertainment), but I would instead draw parallels to an even younger age group.

Millennials grew up when the internet wasn't ubiquitous. Many will remember the day a computer finally entered their home, or wandering into early chat rooms. I myself didn't have a smartphone until after high school. If we substitute TV for the "social internet," I would say that Generation Z or Zoomers would be a more apt comparison, as a destabilizing creative force. They have never known a world without the social internet, similarly to how Diana has only ever known a world with TV. The content they create is unlike most anything that's come before, like Andrew Calahan's Channel 5. While this new generation is still forming their creative voice, I hope they take the events of this film as a cautionary tale of what not to do when pushing the envelope.

I cannot recommend this film enough. There's a reason it's part of so many best of compilations and the monologues within are above the rest. Writing any more on the content of the film would do you a disservice. Mental health issues are a large part of this film, so I caution those who are sensitive to those themes.