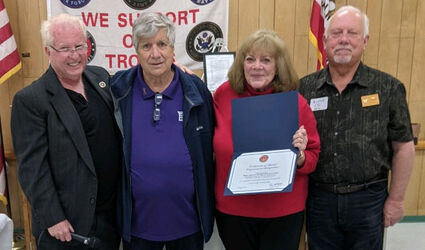 The night started with our Master of Ceremonies, Marty Pay, welcoming everyone. He introduced the commander, Russell Slover, who sang a beautiful rendition of "Amazing Grace." Tracy Keefe offered the opening prayer, which was followed by all the guests reciting the Pledge of Allegiance.

A lasagna dinner was prepared by the American Legion Auxiliary and served by students from Heritage Oak School. We are so incredibly grateful to the American Legion Auxiliary for volunteering to prepare our three-course meals for five of the last seven years. Our heartfelt thanks to the Heritage Oak School students for participating (serving and cleaning) at our banquet for the last two years.

As the doors opened, there were 30 silent auction items. Arriving guests brought additional articles, bringing the number to 36 people to view and bid on. During the evening, everyone in attendance was able to bid on the silent auction items, buy tickets for the cash prizes of $600, $300, $100 and the 50/50 opportunity drawing.

As the evening progressed, Marty Pay spoke about Major George, giving us a brief history of his life and accomplishments, such as graduating second in his class at West Point. His West Point ceremonial sword, pictures and other memorabilia were displayed for viewing at the dinner. They are now on loan to the Portrait of Warriors Gallery located at 1925 Eye Street in Bakersfield. Sadly, he was the first veteran to be interned at the Bakersfield National Cemetery.

Marty Pay continued with a brief history of Christina Athans. Christina was raised in La Crescenta, California. After college she made her career as a senior claims examiner for Workers' Compensation until pancreatic cancer changed her life. She was diagnosed when she was 42 years old. Miraculously, she fought this disease for two years and lost the battle at age of 44. Christina was blessed with a sweet quality that made her kind and helpful to others throughout her life. She lived by the motto, "How beautiful a day can be when kindness touches it."

The accomplishments of Jason E. George VFW were related to all by Marty. In its brief 10-year history, this VFW has helped the veterans of Eastern Kern County and our community in the following ways:

• Worked to get the veterans Administration to come to Tehachapi twice a month.

• Assisted the VA counselors in helping veterans with their necessary paperwork.

• Furnished materials and built a 47-foot wheelchair ramp for a disabled World War II veteran with the assistance of the American Legion.

• Made monetary donations for several worthy causes and projects.

Major Jason E. George VFW has sponsored Christina's pancreatic cancer fundraiser for the last seven years. They have donated 100% of all the proceeds collected to Pancreatic Cancer Action Network (PanCAN).

VFW members and supporters enjoying the lasagna dinner provided by the American Legion at the Post 10th Anniversary and Pancreatic Fundraiser.

Over the past seven years, we have been blessed by the generosity of our community, family, friends and from those people around the country who have heard of our mission and contributed to this cause. This year we raised $20,157, bringing the total for the seven-year period to over $140,000. In past years, we have been able to thank everyone individually by listing them in the newspaper. The number of donors and supporters has grown so immensely that the list has become too large to publish in the newspaper. The members of Major Jason E. George VFW, and Pat and Alex Athans would like to express their sincere appreciation and gratitude by extending to you a great, big hearty thank you!

Thank you for being heroes and waging hope for a cure!