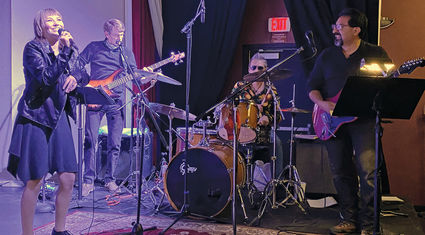 Shutdown since March 15, the Tehachapi Community Theatre (TCT) players have been unable to perform at the BeeKay Theatre due to COVID-19 restrictions. This has been especially painful for Doug Jockinsen and the cast of "Nunsense" as the play was completely rehearsed and ready to go on April 19.

Doug says, "The set is up, the costumes are in the green room, the props are on the tables, the lighting is hung and focused. All we really need is that last month of rehearsal time back, and the Nunsense cast will be ready to go!"

We now keep up our monthly meetings on Zoom, and a new Board of Directors was sworn in in September. But there could be no live productions. The state guidelines lists live theaters simply as, "CLOSED." That hasn't changed since March.

"Just before we closed down, we had paid all the expenses to mount a popular musical comedy and were ready to open for a four-week run and healthy box office revenues. But there was no opening, and so no income. We had a comfortable bank balance from our earlier season ticket sales and 2019 fundraising. So far, that cushion has allowed us to pay our rent, utilities and insurance while we figure out how to stay afloat," said TCT Treasurer Fran Riggs.

The membership discussed many different plans. Teach socially-distanced classes? Find ways to make some of our previous productions available online? We tried a Halloween make-up class that got great reviews. Then Chris Morales came up with the idea of a Late-Night Telethon.

"We didn't know how to do it, or if we could do it," Chris said. "But I put a cast of wonderfully talented people together. Gary Mazzola did Tech, Nick Tanaka, new to TCT, came in and videotaped the show and all the ads. James Carhart created a wonderful set to give the look and feel of a talk show and Doug Jockinsen hung the lights that lit up our stage that had been dark for so long. It took a theatrical village and TCT members came together in a big way. In 45 days, we went from shutdown to live streaming! We had to solve quarantine restrictions, social distancing, amount of people allowed in the theatre at any one time, masks, you name it, and we solved them. Yes, we did."

They researched and built the technical wizardry to be able to stream the show live which raised $1,470 – covering our rent and utilities for this month. A very needed reprieve.

Andi Hicks, a newcomer to the BeeKay, but an old-timer "on the boards," thought it might be fun to add commercials to the mix. It was a good idea. What evolved were the more than 30 local businesses that said "OK, we're in." And some exceptionally good ads were videotaped.

We got off to a rough start with technical difficulties we hadn't expected. But, we have solved every technical aspect now, made it through, learned a lot and are super excited to be streaming the Telethon anew from our http://www.TCTonstage.com/media on New Year's Eve. The show begins at 6 p.m.

We put together a tight show that features performances from previous hits at the BeeKay, like "Young Frankenstein," "Drowsy Chaperone," "110 in the Shade" and even a few scenes from the upcoming show "Nunsense." There are plenty of individual performances by TCT favorites. Have-A-Heart brings you adoptable pets. David Steele Reed brings his puppets. Guy Martin supplies the band, and five lovely ladies with no tapdancing experience will give you an amazing, updated version of "I Want to be Happy" from "No, No, Nanette!" Over two hours of free entertainment!

The Tehachapi Community Theatre is a not-for-profit organization supported exclusively by donations from the public and our ticket sales. We are the caretakers of, and responsible for the maintenance of, the BeeKay Theatre which is owned by the City, and leased to TCT.