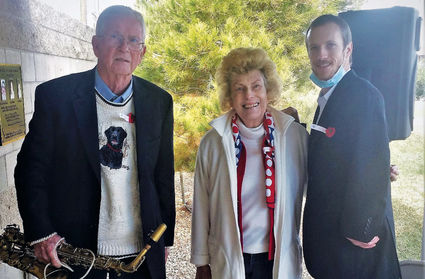 Beautiful November weather with light winds greeted veterans and supporting citizens at the veterans Day Ceremony in Legacy Park at Mojave Air & Spaceport. Thank you to everyone who prayed for good weather!

The keynote speaker was U.S. Air Force Veteran and Tehachapi resident, James Peck who served with the 562nd USAF Band in Van Nuys and served for nine years playing the saxophone and clarinet. While serving, he earned his teaching degree in music and taught at local Southern California schools for 36 years.

Ever the teacher, Peck's talk centered on the history of veterans Day and the wars America was involved in.

"As you know, November 11 was called Armistice Day, because it was the day in 1918 that the Armistice was signed between the Allies and Germany ending World War I, the war to end all wars."

"In 1954, President Eisenhower changed the name of the day to veterans Day to honor veterans of all wars," Peck said.

"Was World War I the war to end all wars? No, we now have 20/20 vision of the history of the wars we were involved in," said Peck.

As veterans Day Coordinator and Emcee, I reminded everyone that November 10 was the 245th birthday of the United States Marine Corps and that we celebrated the dedicated service of Marines who, for nearly two and a half centuries, have upheld a proud legacy of Honor, Courage and Commitment.

Speaker James Peck surprised everyone with a saxophone solo of "America the Beautiful" after Sally and Ken Kendall presented a meaningful presentation of the POW/MIA Tribute. Ken Kendall is a Vietnam Veteran and served with the U.S. Marine Corps.

Congressman Kevin McCarthy sent a letter and in it he said, "Our nation is a country that embodies the freedoms of its citizens. The brave individuals who chose to answer our nation's call to protect our freedoms and democracy and liberate and protect the freedoms of others around the world are to be commended. The noble duty to defend family, friends and neighbors is one very few of us make and one we all are indebted to honor."

"It is admirable that we have so many of these patriots living in our community. May we show today and every day our sincere appreciation to those who have valiantly served. Even with their many accomplishments in uniform, they continue to live out their lives with remarkable humility and grace."

The letter concluded with, "Our veterans are heroes, and our nation is grateful for their sacrifices. We thank you for your service to our country. May God bless each of you and continue to bless America."

Tami Kelley reminded everyone of the Wreaths Across America project that will take place at cemeteries all over the country. On December 19 she will head up the wreath laying ceremony at Mojave Cemetery where over 500 veterans are buried. 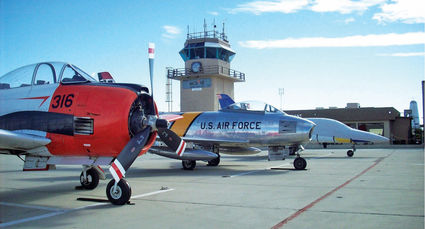