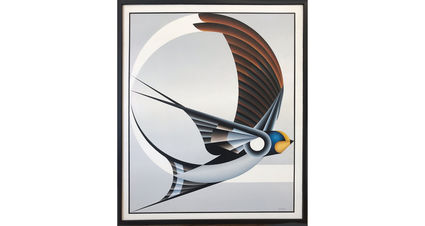 Join us for the September First Friday at the Colleen Farrell Gallery, Tehachapi's newest fine art gallery and artist studio at 112 #A E. Tehachapi Blvd.

Colleen Farrell is an award-winning painter and ceramicist who also teaches for the Kern County School District. Farrell has been influenced by a wide historical group of artists from John Constable to Robert Rauschenberg, or the likes of Mark Rothko to her favorite rebel, Thomas Gainsborough. She has set up her new gallery as not only a place to exhibit a range of fine art, but as a classroom. Along with other teachers at the gallery, she looks forward to a future of interacting with the public of all ages and skill levels and helping them find a little rebellion through art. Ferrell's Art Studio has been serving Tehachapi for 10 years!

The works of two artists will be celebrated for the month of September.

Jim Wilson, a fifth-generation Californian, has lived in Tehachapi for 14 years. He earned his B.A. in Fine Arts from Cal State Northridge in 1979, where he studied under Bruce Everett. Jim works almost exclusively with acrylic paints on canvas, and his subject matter and style range from realistic depictions of street scenes and enlarged marbles and leaves, to non-representational geometric design. His series of abstract birds, in which the compositions are limited to perfect arcs, straight lines, and circles, reflects his fascination with geometry, and he frequently employs a masking technique allowing for crisp lines and stark divisions of shape and color.

Deanie Ramsauer Zeitlin credits her father Henry for creating her awareness and love of painting and inspired the way she looks at color and light. During her childhood, Zeitlin watched her father paint in a home filled with his European influenced paintings. As a flight attendant for 18 years, she had the freedom to explore beautiful landscapes and museums. See more about her at http://www.deanietheartist.com.

Tehachapi Treasure Trove is located at 116 E. Tehachapi Blvd., right across the street from the water tower in Railroad Park. We will be featuring Patti LaZelle of PJ’s Arts and Crafts. Come greet Patti and check out the offerings from our 55 plus vendors, meet the artists, enjoy food and wine and listen to music by Mayde in Ireland.

Tehachapi Christian Store at 108 E. Tehachapi Blvd. will be open First Friday Sept. 6. Come in and meet author Barbara K. and have your book signed.