Burt and Dick Rutan still have a "rock star" following at Oshkosh, the annual gathering of homebuilders and aviation enthusiasts. This year marked the "Golden Anniversary" of the EAA AirVenture Oshkosh – 50 years of aviation spirit, camaraderie and passion.

"I've been to Oshkosh 40 times, the first one in 1971," said Burt Rutan during an interview after stepping out of Rob Scherer's Starship.

"Since debuting the VariViggen at EAA Oshkosh in 1972, Oshkosh has been an important part of my career and life, and I always enjoy interacting with homebuilders, EAA members, and aviation enthusiasts in general," Burt said.

The Rutan Brothers gained International fame in 1986 when the Voyager Aircraft that Burt designed and Dick piloted along with Jeana Yeager around the world, nonstop, un-refueled in nine days, 3-minutes and 44-seconds. Again, Burt was acclaimed around the world when he designed the sub-orbital space plane, SpaceShipOne, the first privately funded space plane that won the Ansari X-Prize in 2004.

What icons in aviation the Rutan Brothers are and they have completed most of their legacy right here in Mojave! Now Burt is challenging others to take on the challenge to design, build and fly a new creation at Oshkosh next year. "Someone needs to get courageous and try something new," said Burt.

As thousands of people gathered in the Theater in the Woods, beginning at 8 p.m. on July 25, Burt and Dick presented a special program titled "Starships to Spaceships: Fun in Mojave." During a telephone conversation, Dick told me that they talked until 12:30 a.m. and no one left their seats! Both Burt and Dick have exciting and interesting stories to tell and they are always captivating.

Mojave, Tehachapi, Rosamond and the Antelope Valley were well represented at the 50th celebration at Oshkosh. First Civilian Astronaut, Mike Melvill was having fun in the photo taken by Jim Koepnick. Someone suggested that Mike toss some M&M's into the air to simulate what he did in the cockpit of SpaceShipOne 15 years ago and Koepnick caught it all on camera. He is also holding an Oreo cookie with an astronaut on it.

Dick Rutan gave a presentation about the Voyager flight and was thrilled to meet a 97-year-old U.S. Army Air Corps veteran who flew B-17s with the "Bloody 100th." The average life of an Eighth Air Force B-17 crewman in 1943 was 11 missions. The missions were on an almost daily basis over targets in Germany. This man served in the Eighth Air Force, 100th Bomb Group, based at Thorpe Abbotts Air Base in England.

Dick said it was a great honor to meet this gentleman and thank him for his service during World War II. He also told him that it was stories of the 100th Bomb Group flying B-17 Flying Fortresses that inspired him to become a warrior in the U.S. Air Force.

The 100th was constituted as a heavy bomber group inside the Eighth Air Force, which, at peak strength on D-Day, June 6, 1944, fielded 40 groups of Boeing B-17s and Consolidated B-24s. The 100th's tail marking of a bold "D" on a square background was rendered on the vertical stabilizers of its B-17s, whose big, parabolic-shaped tail fins made for an effective if utilitarian canvas. In 2018 the Square D still adorns a Boeing aircraft-the KC-135R-though the 100th is now an aerial refueling wing. Even still, the Square D carries with it the heroic, bloody history of the 100th Bomb Group.

The group acquired its reputation as a hard-luck unit very early in its operational history, and it would go on to become known as the "Bloody 100th," a nickname laden with the weight of sacrifice. While the 100th lost only a single bomber on the first Berlin mission, the use of P-51s to provide air cover over Germany didn't completely eliminate the group's propensity for bad days. Two days later, on March 6, 1944 the 100th suffered its worst losses of the war-15 aircraft and 150 crewmen-on the second mission to Berlin.

Oshkosh is a wonderful experience and is a place where the aviation history of the past meets the present and all of the attendees can see into the future of aviation. 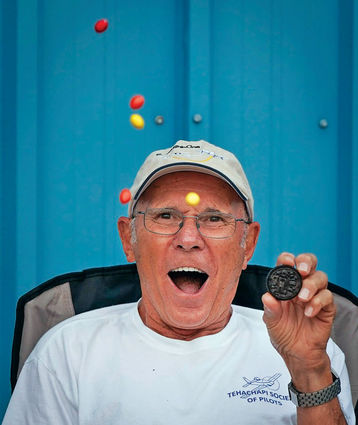