Unexpected encounter at the North Pole 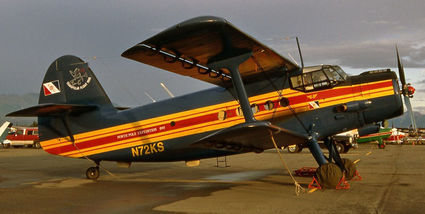 Ron Sheardown's AN-2 at Anchorage Airport.

At the December Plane Crazy Saturday, Dick Rutan, described his unexpected North Pole adventure with our good friend, Ron Sheardown and his Antonov AN-2 biplane. We also saluted the Voyager crew and volunteers on the 32nd anniversary of the epic flight of Voyager, nonstop, unrefueled around the world.

I knew Dick was headed to Alaska to meet up with Sheardown, so I sent some cookies up with Rutan. Later, I was informed that my cookies were too heavy and caused the airplane to break through the ice. I told them, "OK, next time angel food cake, it's much lighter!"

On Monday, May 8, two airplanes left Anchorage - the AN-2 with Sheardown, Rutan, Jim Bowden and Walt Parker; and a Cessna 180 with Lee Wareham and John Pletcher. They stopped in Fairbanks before heading to the North Pole. They arrived at the North Pole on Thursday, May 11 and spent about an hour on the ice, before setting off for Spitsbergen, Norway. It was an unusual experience for a guy from the Mojave Desert to see the vastness and desolate beauty of the geographic North Pole. Watching the sun all day at different points on the horizon, but never setting, is mind-boggling and very few people can say that they stood on a spot of the Earth where every direction is south! The group enjoyed the weekend in Spitsbergen, a Norwegian settlement of 2,500, before heading back home toward Alaska.

Sheardown has over 19,000 hours and 40 years of experience flying in the Arctic. He used to watch aircraft at the local airport in Edmonton, Canada, from his home across the street and relished hearing local pilot's share stories. He earned his pilot's license at the age of 16, and amassed over 19,000 hours as pilot in command with over 10,000 hours in Polar Regions of the world.

Sheardown is the recipient of many national and international awards, including the prestigious Collier Trophy. He was one of six Arctic explorers who recreated an aerial journey in 1997, a record originally set by Ben Eielson and George Wilkins in 1928, by flying from Barrow, Alaska to Spitsbergen, Norway in a single engine airplane. The team was sponsored by The National Geographic Explorer television show and they all set out in two 1947 designed Russian Antonov AN-2 biplanes.

His AN-2 "Colt" was very new, as he had flown it from the Polish factory, across the sea to Spitsbergen, then across Northern Canada to his home in Anchorage.

No stranger to adventure, Ron and co-pilot Glen Stevens made a dramatic rescue of a downed pilot above the Arctic Circle on April 1, 1967.

Bob Gauchie had been lost for 58 days in a de Havilland Beaver, when Ron and Glen were flying out of Yellowknife to a mining camp they happened to see a brief flash of light. They thought perhaps it was a glint of sunshine on a windshield and they turned back to take another look.

They were astonished to see a dark figure moving out from an aircraft that was barely visible in the snow. There is a detailed article about the rescue online at: http://www.adn.com/article/20140909/alaska-aviation-legends-ron-sheardown-polar-adventurer.

Flight from Spitsbergen: As the group left Spitsbergen, with one more person on board, Jan Haughstad, who heads Norway's Polar Institute, they decided to stop one more time at the North Pole. In hindsight, I'm sure Sheardown wished they had just flown over and kept going. But, the Cessna 180 landed first to check the depth of the ice. Apparently, there must have been some time elapsed before the ice was measured and since Sheardown didn't receive any radio call stating that the ice was too thin, he set up for his landing. "The ice was covered with snow and looked much deeper," Wareham said. "It was too late once we tried to wave them off." When Sheardown added power, the AN-2 had only gone a few feet when it nosed over into the ice.

Everyone climbed out of the airplane that was slowly sinking into the ice. The huge lower wings supported the aircraft as Sheardown went back into the AN-2 to retrieve Survival gear, HF radios and other expensive equipment.

During the presentation at Plane Crazy, Rutan said he had mixed feelings about being rescued after only 13 hours by First Air's de Havilland DHC-6 twin Otter with skis. Conditions were mild by polar standards – winds were calm and the temperature was a little above zero. The 24-hour daylight made the rescue easier.

He was amazed at how clear the air was, that made pressure ridges appear closer than they really were. He wanted to explore more. It was a true adventure to be totally stranded at the North Pole. He said when the Cessna 180 took off and flew over their heads, they knew that word would soon be out that they needed help. He remarked the feeling of hearing the last sounds of the 180s engine and then the silence of being totally alone on the ice. The only sounds were the eerie and loud cracking of the ice in the distance.

Thank you Dick for sharing with us the story of Ron Sheardown's "frozen assets!" Merry Christmas everyone! 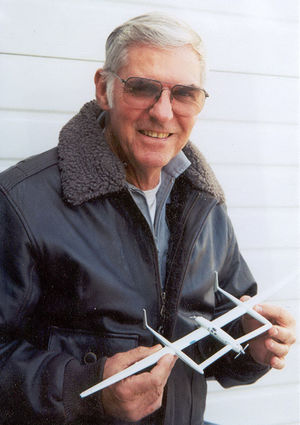