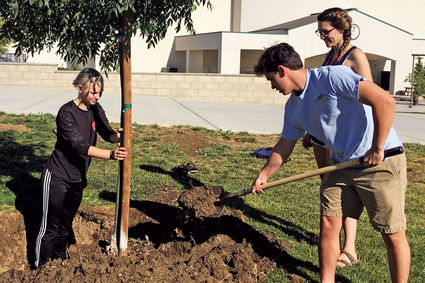 A mini-forest has sprouted at Tehachapi High School.

After vandals cut down about two dozen trees in May, a group of nearly 130 volunteers took to the soil and replanted not only the destroyed trees, but a handful of extras as well.

The incident, which was originally believed to be a senior prank, led to a lot of hurting hearts and an angry community. While other destruction took place on campus, like gluing coins over keyholes, those actions seem to be merely an annoyance, while the trees were a personal loss.

"When I saw it, I was devastated. I think a lot of teachers had very visceral reactions," said Amy Watkins, ASB adviser. " But this, today, is awesome. It's nice to see the community out here and so many kids helping on their summer break."

Officials are still investigating this terrible vandalism, but many believe this was in no way a senior prank, in fact, THS seniors were heartbroken over the destruction.

"The students were really upset and angry that this happened," said THS Principal Scott Heitman. "This is not my campus, this is their campus and I am overwhelmed by the feelings of support from them."

THS maintenance staff worked ahead of time, preparing the grounds for the June 22 volunteer planting event. Volunteers arrived at 8 a.m. to a campus lined with giant holes, bags of fresh soil and large trees waiting to be placed in their new homes.

"[The vandalism] was really hard on the maintenance staff ... to see something like that happen after so many years of nurturing and caring for these trees is just devastating," said Kelly Patterson, secretary to the director of maintenance and operations.

When news broke about the vandalism, Tehachapi sprang to action. It didn't take long for crowdfunding efforts to begin and many in the community began donating trees. Heitman said just hours after the destruction was discovered, students and their families began buying trees and offering support.

"It's amazing how tight-knit this community is," Patterson said. "This is really something special."

Along with students and their families, Tehachapi businesses, district employees and members of the community donated trees for the replanting effort. Our local Home Depot donated about 25 trees.

It was amazing to see so many students, especially seniors, back on their campus early on a Saturday, during their summer break. Students said they were determined to replant their campus and repair their class reputation.

"It's cool to see a lot of people here. After the incident it really sucked, but I think it brought people together more than anything else," said Rex Stancliff, a 2018 THS graduate. 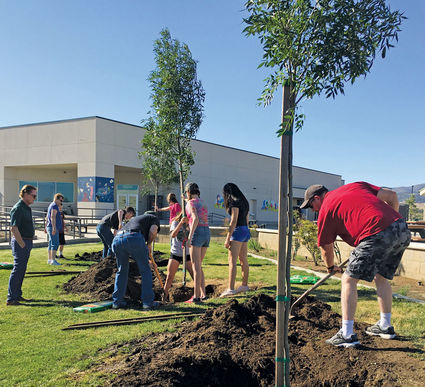 THS looks much greener, thanks to volunteers and a collection of donated trees.