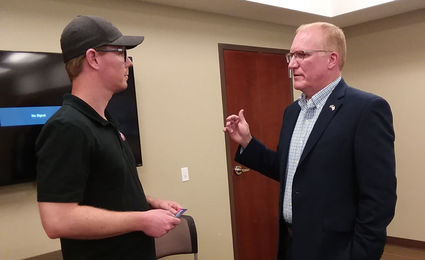 Scott Spielman is a Kern County Assistant District Attorney who has seen numerous cases during his career where families have been devastated when loved ones have died as a result of drunk driving. During the last year there were 4,000 DUI arrests in the county and probably more that eluded arrest. Many teenagers have been involved in accidents where drinking was a factor.

Spielman wanted to help prevent senseless deaths so he joined an organization called A Life Interrupted. He became a volunteer who goes into schools and talks to students about dangerous driving habits. With a multi-media presentation of pictures and stories of real accidents, volunteers try to make students aware of good driving habits.

Kiwanis members were shown some of these pictures when Spielman spoke to the club. The pictures were startling and the stories of the pain and suffering caused to both drunk drivers and victims were tragic.

A Life Interrupted was started by a policeman, and it operates on grants and donations to fund its program. The organization owns a trailer on which a mangled wrecked car can be transported to places where students see what can happen in drunk driving accidents. It is hoped students will change the way they think and become safe and cautious drivers.

Kiwanis is appreciative of this program because the safety and well-being of children is a basic goal for them. The Club meets most Wednesdays noon at the Tehachapi Police Department Community Room, 220 W. C St. Call (661) 823-4848 for more information.