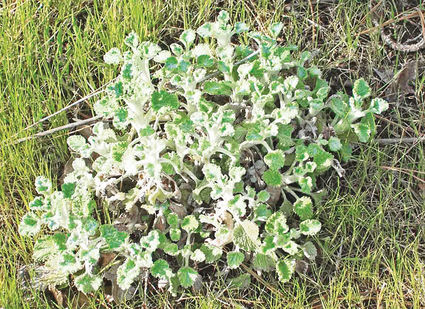 There are very few herb plants that I can't easily give away. White horehound (marrubium vulgare) is one of these! It is scorned and considered a weed by those who do not know of its historical and practical virtues. Let us look at this herb that grows so easily and is so disliked by many gardeners.

It is an upright, bushy and hardy perennial with wooly stems and rounded hairy leaves that have serrated edges and a musky smell. The small white flowers grow in dense whorls (circular patterns) along the stem. It grows happily in sunny, dry locations enjoying poor soil. It self-sows profusely so it is ideal for large wild growing areas. The propensity to spread is a problem for some gardeners who do not know that if you cut the flowers before seeding the plant's invasion can be controlled. The barbed seeds are a problem because they hook onto clothing and animal fur. They are prickly and hard to remove. Controlling the seeds is key to success!

Horehound should be cut for use just as the flower buds form. The menthol flavor dissipates fast so "quick drying" is essential. This is achieved by chopping and spreading the leaves on waxed paper and allowing them to dehydrate out of sunlight. Happily the musky smell disappears during the drying process. Store the finished product inside a tightly sealed container in a dry place.

Horehound was widely used as a medicine by the Egyptians, Greeks and Romans and the common name is taken from two of these cultures. The name of the Egyptian god of the sky, Horus is thought to be the derivative for the first part of the word. The Greeks used it as an antidote for mad dog bites hence the second part of the word was established. These early users held horehound in high esteem and credited it with many cures.

Marrubium vulgare is one of the bitter herbs of the Jewish faith and was ordained to be eaten at their Passover supper. The Hebrew word marroh means "bitter juice". There seems to be a word link here! Horehound cough drops and syrup were made in England as early as the 1600's. The herb later found favor with the Shakers who added it to their pharmacy of herbal cures.

Many of horehound's credits have not been affirmed by modern science but there are some important ones that have. It is used today to soothe coughs, sore throats and as an expectorant. Its volatile oil, vitamin C and high concentrations of mucilage are the ingredients that cause these affects. It is found today in cough syrups, cough drops and candy (see recipes). CAUTION: Large doses can cause diarrhea or irregular heartbeat and should not be taken during pregnancy or lactation. Consult your physician before using medicinal amounts.

Culinary horehound is used to flavor some ales and teas in England and can be substituted for hops in the beer making process. Its menthol like taste makes an unusual candy as well (see recipe). It attracts bees and is a good garden companion to tomatoes so you may find a place for it in your vegetable garden.

A special thanks to Jo Walker for asking about horehound. Hope this answers your questions and you enjoy your adventure with marrubium vulgare, Jo! Anyone else want to give horehound a try? I have it in abundance and would be happy to introduce you to this underrated yet historically authenticated herb. You too can enjoy an herbally adventuresome month with horehound! Contact me at http://www.herbbasket.net with your column suggestions.