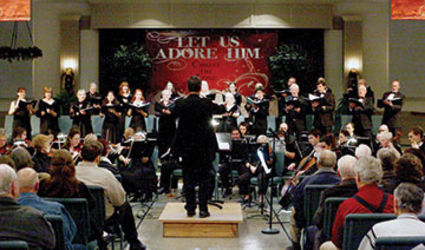 The holiday concert will feature selections from Handel's Messiah. During the summer of 1741, the Lord Lieutenant of Ireland offered Handel the opportunity to visit Dublin, there to stage a series of concerts featuring Handel's music. Handel set to work on the music for Messiah on August 22, completing the enormous work on September 14, a mere three weeks later. Messiah was premiered on April 13, 1742 in Dublin for the benefit of charity and drew so many people that ladies were requested not to wear hoops, in order to accommodate a larger audience.

Messiah consists of three sections. Part I concerns itself with the prophecy of the coming Messiah, drawing the text from the Old Testament prophets, then from the New Testament recounting the story of the shepherds in the fields who are visited by an angel proclaiming the birth of the Messiah. Part One ends with the chorus singing "His yoke is easy, His burden is light."

Part II describes the Passion, death, and resurrection of Jesus. Part II concludes with the unabashed joy of the familiar Hallelujah Chorus. During one of the early London performances, King George II spontaneously rose to his feet in a spirit of exaltation. Audiences have traditionally repeated this practice ever since.

In Part III, the spiritual messages represented by Christ's teachings are set forth for the instruction and benefit of all. It opens with the moving soprano aria "I Know That My Redeemer Liveth", and concludes with a final chorus of "Amen". The overall mood of Part III is one of thanksgiving.

Movements I, IV, and VII from Bach's Cantata BWV 140 ("Sleepers Awake") will also be performed. In 1731, Bach wrote Cantata BWV 140, introducing passages from the Song of Songs. They are treated as love duets between Christ and the Soul. The main chorale melody is set as the night watchman's song in between the two duets, again a reference to Song of Songs.

In Movement I, Bach sets the chorale tune in the sopranos, doubled by the watchman's instrument, the horn. The three lower voices represent the scurrying to action.

Movement IV, one of Bach's more beloved choruses, supports a unison string melody over which the tenors, also in unison, float the second verse of Nicolai's Chorale. This wedding song of the Bride Zion (church) and the Returning Bridegroom (Christ) leads all to the feast.

In the final chorale, all of the instruments join with the choir, taking on an added brightness by Bach's use of the piccolo playing the melody an octave above everyone. Surprising harmonic coloration on the final melody depicts the brilliant and eternal rejoicing in the heavenly Jerusalem.

Audience members may meet directors, soloists, and musicians during the reception following the concert.