Do any Tehachapi animals hibernate? 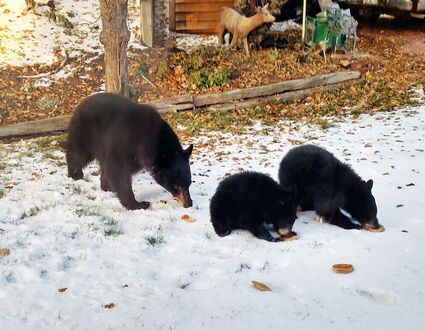 Mary Cunningham took this photo at her home in Bear Valley Springs of a sow California Black Bear and her cubs after a snowfall.

Since the Tehachapi Mountains can get very cold in winter, and we usually have snow, you may wonder if any creatures in our area hibernate to avoid the coldest months. Let's look at how local animals cope with the cold.

Black Bears are well-known for hibernating, at least in areas with severe winters, but the picture is more complicated in an area with mixed or open winters like Tehachapi. The term "open winter" refers to areas that get snow and cold, but may also have much warmer periods during the cold months as well. Maybe they should be called "whiplash winters," when temperatures can be in the low teens, but a few weeks later reach 60 degrees, and then drop back down well below freezing again.

With Black Bears, hibernation is largely dependent on food availability. If food is available and the winters are mild, then Black Bears will skip hibernating. Historically, back in the 1800s and the first half of the 1900s, when Tehachapi winters were often much colder, bears in our area did typically hibernate.

Bob Freeman, who ran goats in the Sand Canyon area in the 1930s and 1940s, told me that oldtimers had told him that there were usually Black Bears hibernating on the north side of Sugarloaf, the large rounded hill out in Sand Canyon.

Sow bears are more likely to hibernate, since they den up to give birth in January and February, and boar bears tend to be active year-round. With the kind of warmer winters we have now, many bears in our area no longer hibernate.

Most of our other mammals remain active as well. Jackrabbits and cottontails are not creatures that hibernate, so they must continue to find food, and you can often find their tracks following a fresh snow.

With squirrels, the case is mixed: California Ground Squirrels do at least partially hibernate during the cold months, while California Gray Squirrels do not. These beautiful tree squirrels have thick coats and they store lots of food, so they are able to remain active year round.

Our other squirrel species, the little Merriam's Chipmunks, are like California Ground Squirrels in that they may hibernate to avoid very cold weather, but can then emerge and become active if we have a warming spell. Chipmunks store acorns in their burrows to ensure that they have food.

So you can see ground squirrels and chipmunks on warmer days, even if there is still visible snow in the shady areas, but they may disappear again if we have a prolonged cold period.

Our little winged mammals, the bats, must either migrate or hibernate in winter, because as nocturnal insect eaters, their food sources disappear entirely when the nights get cold. Some species hibernate in tree cavities or caves, while others migrate south to warmer locations.

All of our birds either remain active during the winter, or fly south to snow-free locations. With birds the motivation is typically to find food – their feathers do a superb job of keeping them warm, so it isn't the cold weather that bothers them, it is the shortage of food that often occurs during the winter months.

We do have one bird species that can enter a prolonged torpor during the coldest times, and that is the Common Poorwill (Phalaenoptilus nuttallii). These birds are a type of nightjar, like whip-poor-wills, that resemble bats: they are nocturnal birds that fly at night, swooping up insects in their large open mouths.

During cold times, common poorwills can lower their body temperatures to as low as 41degrees Fahrenheit, and remain that way for weeks. A few other bird species, like Anna's Hummingbirds and some doves also enter a torpor at night to conserve energy until morning.

While hibernation is a term used just for mammals, our reptiles all disappear during the winter months as they enter the reptile equivalent, which is called brumation. Snakes and lizards find a sheltered location and remain within it for the duration of winter, not emerging until the warming sun of spring.

Small lizards are the first to come back out, and some of them will actually appear during the warmest, sunniest winter days if the sun warms up their hibernaculum. But then they return if the days are cold, and may be hiding again for weeks until lasting higher temperatures settle in.

Amphibians like frogs, toads and salamanders also enter into brumation, though it tends to be more intermittent, and amphibians are typically much more cold tolerant than reptiles. You can hear male Pacific Chorus Frogs calling from ponds at night as early as January following a rain, when the reptiles are all still asleep in their hibernacula. 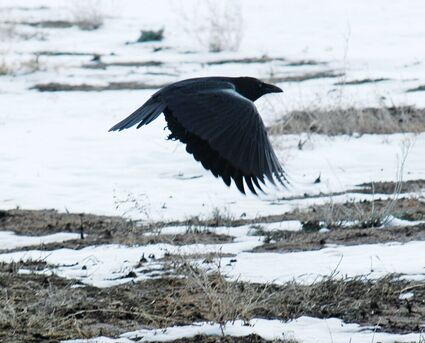 Ravens prowl the landscape year-round, and are experts at finding food and dealing with cold temperatures.

So you can see that most of our animals, with the exception of reptiles, don't sleep away the winter but remain active and have to go about their lives year-round, just like we do. I hope that our recent rains continue, and better yet some snow, to make this a wetter if not colder winter.