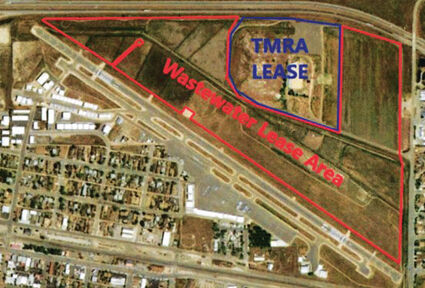 At the Dec. 5 City Council meeting, Public Works Director Don Marsh reported to the Tehachapi City Council that the city's Wastewater Division leases approximately 81 acres located on the north side of the airport from the Airport Fund. They use the wastewater effluent to grow fodder crops and alfalfa to be sold locally. The operation and maintenance of the project has been performed using city employees for years. Over the years the city had been approached by farmers and ranchers making proposals to use the property for more formal farming and grazing operations.

In October, the city sent out a request for formal proposals from farmers interested in sub-leasing the property for the purpose of growing the animal feed crops. At the end of October, Tehachapi Farming and Ranching Co. was awarded the contract pending approval by the City Council. The company has experience with the use of effluent water, as well as experience of working within an airport. The City Council unanimously approved the agreement.

Marsh said that TFR plans to plant a mixture of small grains and alfalfa to be sold locally. All operations will continue to be in compliance with airport operations. The lease will not bring in revenue until the second year of operation and will then be $61.75 per acre per year for the next four years. This would also result in an annual reduction of approximately 1,000 man-hours annually by Wastewater staff.

Marsh also presented and the Council approved a proposal that the city retrofit the grandstands at the rodeo grounds that were installed in 2012 as temporary seating. Under the new proposal, the grandstands would be brought up to current building codes for permanent installation. The Tehachapi Mountain Rodeo Association has been using the grandstands since 2012 for rodeos and other community events. The city budgeted $100,000 for the year 2022/23 for the retrofit project. Merjil Steel Fabrication will furnish the material, labor and equipment for the structural retrofit for $78,600. The footing will take the remaining $21,400.

Development Services Director Jay Schlosser presented two grant funded programs for approval. The Council first approved an enhanced striping project. The project would be financed from the Highway Safety Infrastructure Program (HSIP) and provides for new edge-lines and centerlines made of thermoplastic that would increase safety by providing better visibility on many of the more heavily traveled streets in the city. The $186,049 project was awarded to Superior Pavement Markings.

Also approved was the third phase of sidewalk improvements in the residential areas on the north side of the railroad tracks. This phase targets the south side of I Street between Green Street and Davis Street and will soon enter its design phase.