Thanksgiving: remembering to give thanks throughout the years 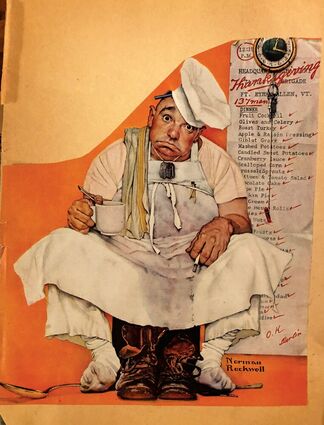 This cover from 1942 shows an exhausted Army cook who has just finished making a Thanksgiving dinner to feed 137 soldiers.

Thanksgiving is an annual day of celebration that has persisted in what is now the United States for more than 400 years – long before this land went from being a rebellious English colony to its own fledgling nation.

What is widely considered our the "First Thanksgiving," though there is debate about that, took place in 1621 in Plymouth, Massachusetts when the surviving Pilgrims sat down to a feast with neighboring Wampanoag people.

Joining them was Tisquantum, incorrectly called Squanto, who was the last surviving Patuxet tribal member. This is the famed Pilgrim and Indian Thanksgiving that American schoolchildren have commemorated for generations with assorted craft items made from paper, crayons, yarn and glue.

The celebration has continued ever since the Plymouth gathering, though the date has frequently changed. The event used to be on a date chosen by each state, and they didn't always pick the same day.

Appropriately, it was our most humble and gracious of Presidents, Abraham Lincoln, who fixed the official nationwide date of celebration as the last Thursday of November. Lincoln did this in 1863 after the Union won the Battle of Gettysburg.

Like much else in America these days, Thanksgiving carries along some controversy and baggage, pertaining to various issues, like the abysmal treatment of Native peoples, whether or not Thanksgiving is still a religious holiday, the blatant commercialism of launching "the biggest shopping day of the year" on the very next day, ominously named Black Friday, etc.

Me, I try to avoid any negativity and keep it simple. I just think of Thanksgiving as a day for doing two things: spending time with family and/or friends, and being grateful. Since the time with loved ones typically includes feasting, that's all the more reason to like the day.

As a small town, Tehachapi has always been the kind of place that people return to on holidays like Thanksgiving. For longer than America has been a country, it's worked like this: kids who are raised in rural areas and small towns leave their hometowns for the opportunities and higher wages found in cities and distant places.

But their parents and older relatives often stay behind, so the grown kids return on holidays, bringing their own children if they've started a family. It just feels right to come back to the sleepy place where you where raised.

Because a lot of retirees now leave cities to spend their retirement years in slower-paced communities, where homes are cheaper and people tend to be friendlier, families often come to places like Tehachapi to spend Thanksgiving with the grandparents even when the parents themselves weren't actually raised here. It just makes sense.

Since Americans tend to move a lot, the grandparents' home is often the most stable, familiar place to return to. It becomes a place where childhood memories mingle and blend together over the years, with welcome feelings of déjà vu when the family traditions are repeated.

Of course the faces around the feasting table changes with the years. Time robs us of some of our most cherished loved ones, but may also bring new faces with births and marriages, friendships and relationships.

Having grown up in Tehachapi, I have spent nearly every Thanksgiving of my life in this little place with the unique name. I have sat at a table crowded with my family members, and then experienced the changes as they moved away or grew elderly and dropped from the Tree of Life like dry leaves.

I have joined sweet friends at their Tehachapi Thanksgiving tables, and enjoyed the glow of their kindness and hospitality. I've loved it all.

To accompany this story, I've taken photos of old Saturday Evening Post covers that my grandmother, Edith Hand, carefully cut off the magazines and put in a scrapbook beginning in the late 1930s.

These are illustrations created by that most American of artists, Norman Rockwell. He has sometimes been dismissed as not a serious artist, or criticized for having created some sanitized view of the country. He may have been nostalgic, and employed some stereotypical tropes, but he also captured rural and small town America better than anyone else ever has, before or since. 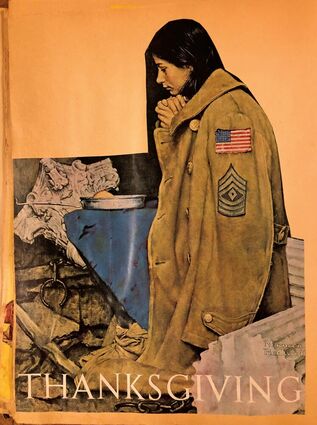 This is a beautiful Saturday Evening Post magazine cover by Norman Rockwell, from the turbulent World War II year of 1943, depicting a young woman saying grace over her meal in war-torn Italy.

Tehachapi was a Norman Rockwell kind of place for most of its existence, and parts of it still are. You can still savor many aspects of small town or country living here. I know, I do it every day.

I hope people can put aside politics and division and enjoy Thanksgiving 2022. It doesn't have to be complicated – count your blessings and radiate gratitude, give thanks however you see fit, and gather with some loved ones.

It is, after all, a time-honored tradition.