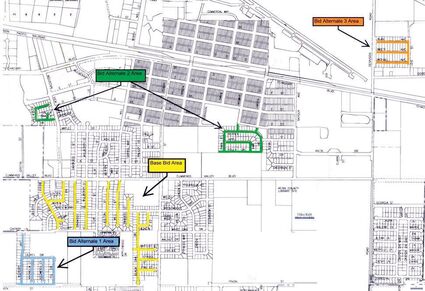 Roads to be slurry sealed.

The Tehachapi City Council meeting held on Nov. 7 began with council approval for the upcoming Tehachapi Hometown Christmas and Tree Lighting, to be held on Dec. 3. The event will take place on N. Green Street and Centennial Plaza from 2-5 p.m. prior to the Christmas Parade at 5:30 p.m. There will be photos with Santa, craft booths, vendors and charitable organizations. Following the parade at 6:30 p.m., will be the lighting of the giant tree at the Depot.

On Aug. 15 the city experienced a complete failure of their Wahlstrom Well, including the pump bearings and pump shaft. Bakersfield Well and Pump were brought in on an emergency basis to get the pump running again. This included flushing the well and taking samples. Although the cost of the repairs amounted to $72,300, the city's insurance should cover all but the $5,000 deductible, which was approved by the Council.

Development Services Director Jay Schlosser announced that La Bodega de Castillo, a new beer and wine business, will be opening at 109 N. Green Street, located behind Darlene's Toys. The Council approved the finding of public convenience that is required by the Alcoholic Beverage Control before issuing their beer and wine license. La Bodega has been in the works for two years and the owner has been doing all the work himself. Schlosser said the business will help to bring more people to downtown by joining the "beer mile" and will be a short walking distance from the center of downtown.

Council approved a new Community Facilities District for Sage Ranch, the housing project that is to be located between Valley Blvd. and Pinon Street, west of Tehachapi High School. This process began with the development of Walmart as a way for new developments to pay for city landscape, lighting and other services without causing a financial burden on existing residents of the community. The property owner will begin paying the special taxes beginning fiscal year 2023/24.

Schlosser reported that every year the city of Tehachapi receives approximately $270,000 from the Road Repair and Accountability Act of 2017 (SB1) to be used for basic road maintenance, rehabilitation and safety needs. Tehachapi's needs are reassessed every couple of years and presented to the City Council for approval. Slurry seal application can prolong the life of a road from five to seven years and the City of Tehachapi has been systematically refreshing city streets since funding began. The second Surface Treatment Project list for SB1 22/23 was presented to the City Council for approval. It includes approximately 29 streets in five residential areas (see map). The Council unanimously approved the project.