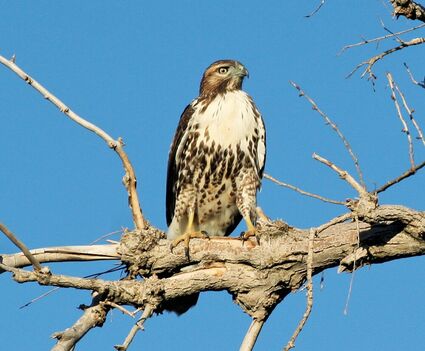 "Cho'ikizh! Cho'ikizh!" The Nuwä Indian woman heard the familiar call as she sat under a hava kahni (shade house), a square, open-sided shelter made of willow poles and topped with a thatching of leafy willow branches.

As she sat in the welcome shade on a warm summer morning, weaving a basket with her skillful fingers, the piya (mother) again heard the sound: "Cho'ikizh! Cho'ikizh!" (cho-EEK-izh).

This was not a human calling out, it was a Western Scrub Jay, making one of the raucous calls for which this bird is well-known. An approximation of this sound became the Nuwä (Kawaiisu or Southern Paiute) name for scrub jays. It is also a name sometimes given to a young tribal member who is known for being noisy and active. I know two tribal members – Julie Girado Turner and Erik Williams – who were each given the name Cho'ikizh.

Traditional Nuwä people spent most of their lives outdoors and were very well-aware of the birds that shared their surroundings in the Tehachapi Mountains. They often gave birds onomatopoetic names, like Cho'ikizh, which were suggestive of the sounds that the birds made.

Another example is Ataakaz (ah-TAHK-ahz), the name for Common Raven, which is reminiscent of the cawing sound made by ravens.

Mourning Dove was given the name Hoyov (hoy-YOVE) as a verbal rendition of the soft calls made by these gentle birds.

Woodpeckers were called Taataraage'eb (tah-tah-rah-GEH-eb) as a name that reminded speakers of the rat-tat-tat drumming sounds that woodpeckers make tree limbs.

Chickens were a later addition to the Nuwä world, of course, after they were introduced first by Spaniards and later by Americans, but they too were given an onomatopoetic name: Kakawut (kah-kah-WOOT) after the crowing of roosters.

California Quail were known to the Nuwä as Taara (tah-RRRAH), with a rolling "r" sound, to approximate the whirring sound of quail wingbeats when a startled quail is flushed from cover.

Owls were called Muhutsi (moo-HOOT-si), obviously suggestive of the hooting calls made by Great Horned Owls. Once when he was a little boy, Harold Williams' mother Clara told him that she was going to drive down into town, but that he had to stay at the remote family home off the grid at the Mendiburo Ranch, in what is now Mountain Meadows.

Little Harold objected to being left behind, and so he told his mother stubbornly that "I'm going to let Muh-hoo-hoo eat me up!" Unsurprisingly, an owl did not eat up young Harold Williams, and he grew up to become a respected elder and Nuwä leader until his passing in 2018.

Not all birds had onomatopoetic names. Red-tailed Hawks were given the name Kwanazi (kwah-NAHZ-ee), from the word kwasa, which means "tail," so the Nuwä word, like the later English common name, referred to the raptor's distinctive tail feathers.

Hummingbirds were called Muutanapizhi (moo-tah-nah-PIZH-eh), which translates literally to "just a little man." Hummingbirds were held in esteem by the Nuwä, and they are characters in some of the traditional stories told by Nuwä elders.

A bird that figures prominently into the Nuwä creation myth is called Potok (poh-tahk), which was apparently an American Coot, an aquatic bird that was able to dive deep into the primordial water and bring up mud that eventually grew into the land on Earth.

Interestingly, the name Potok does not appear to be of Nuwä origin, and may be a loan word from an adjacent tribe, like the Kitanemuk of the Tejon and Antelope Valley areas. And confusingly, the Nuwä have their own word for mudhen, which is a nickname for coots, and it's Saapüzi (sah-PUH-zi). But in the telling of the traditional creation story, the name given was typically Potok.

The traditional Nuwä people, like the basketmaker at the start of this column, knew the birds and other animals that were their neighbors, and often gave them very logical names, like Cho'ikizh. It is a gesture of respect, and a recognition of their knowledge, to remember and use these names. . .

Have a good week. 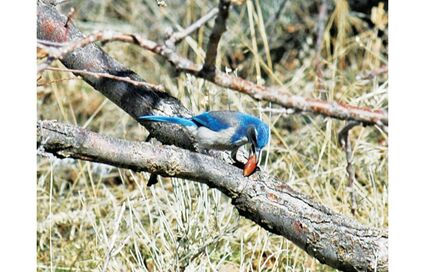