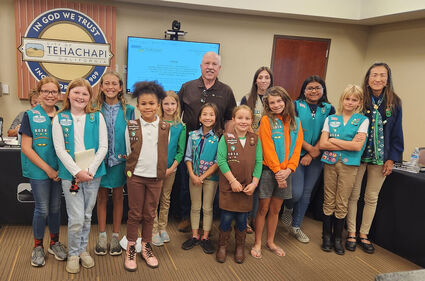 The composite troop is made up of girls from all area schools, including Valley Oaks Charter, and includes levels from Brownie to Senior Scout. The girls had compiled a list of questions for Mayor Smith and each had the opportunity to ask one. When one girl asked Smith why he wanted to be mayor, Smith responded that it was like wanting to be a Girl Scout – for community service. Smith explained that the City Council members are elected and each one represents an area of the city. The mayor is chosen for a two-year term by the City Council members. Smith said he has been elected to the City Council since 1986 and has been mayor five times.