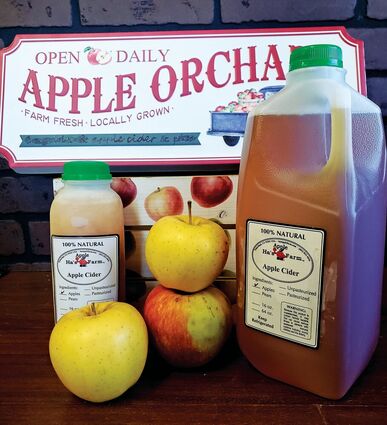 The Apple Festival was just the beginning! Check out Ha's apple cider, plus other Ha's Apple Farm products, at Healthy Hippie Trading Co.

Tehachapi residents have been excited to find out that apple and grape cider, made from Tehachapi apples, is now available at Healthy Hippie Trading Co., located in Old Town.

"We decided to sell apples and apple products grown and produced locally by David Ha of Ha's Apple Farm. I'll admit, I didn't even know that he made cider from the apples and grapes that he grows right here in the valley. When he suggested that I sell it at the festival it was a no-brainer. I figured it would be a popular item but I had no idea how popular," she said.

Despite purchasing what she thought would be plenty of cider, they ran out of apple cider about half-way through the second day of the event.

"I felt terrible that we couldn't provide apple cider for the many people who flocked to our booth. Luckily, we had plenty of the grape cider, which is just as delicious, but we decided that we would figure out a way to carry it in our store so that those whom we had to turn away could get another chance to buy some cider," she said.

A few calls and emails to the health department later and the Healthy Hippie was in the cider selling business!

Cider differs from regular juice in that it is unpasteurized and it contains more of the healthful compounds found in apples called polyphenols, which act as antioxidants in the body.

"Because the cider is not pasteurized we keep it frozen," Sarah explains. "That also allows customers to purchase ahead of time for the holiday season."

"Many of our locals are familiar with the old fruit stand on Stueber Rd. near Mr. Ha's orchard and storage yard, however it has not been open for years," Sarah said. "We are the only location in Tehachapi that carries their products that include dried fruit, jams and jellies including apple butter, fruit strips, apple cider and apple syrup. We also have baskets and tins available to create gift baskets that are perfect as holiday or house-warming gifts."

Head on over to Old Town and stock up on cider and other awesome products. Healthy Hippie Trading Co. is located in the plaza just east of Old Towne Pizza. You can see them from 202, but you access the plaza by going around Wild Rose to 20418 Brian Way. Their hours are Monday through Saturday from 10 a.m. to 6 p.m., Sunday from 10 a.m. to 3 p.m. with winter hours starting Nov. 1 where they will close at 5 p.m.