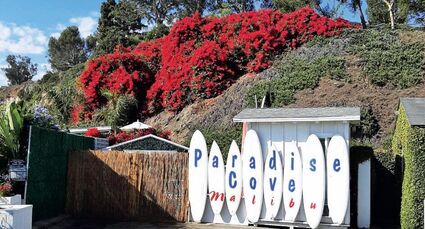 Paradise Cove in Malibu is a picturesque and cozy beach experience for surfers and swimmers, diners, and general beach lovers.

My mother and I discovered Paradise Cove in Malibu a couple of decades ago when we were driving down the coast on Highway One (aka Pacific Coast Highway), exploring interesting sights. We saw the giant sign and turned in on a whim to check it out.

What we found was a beach café (a large restaurant and bar really) and a wonderful little pier and a small, cozy stretch of beach. We also found out that the cove was the spot where the fictional TV character Jim Rockford (played by James Garner) lived, and since both of us were big Rockford fans at the time we were truly delighted with our discovery.

Even better, we stayed for lunch and both of us had the clam chowder, and it was to die for!

Mom's been gone a long while now, but through the years I've made a point of visiting Paradise Cove for lunch periodically, a great little day trip. From Tehachapi it typically takes about two and a half hours to get there (very little rush hour when you leave Tehachapi between 9 and 10 in the morning to get there at lunchtime), and a few more hours to get home (you can pretty much always count on afternoon rush hour traffic).

I've gone alone a few times, and several times with a friend or friends, to eat lunch and spend some time on the beach just watching the waves, the sea gulls and pelicans, and the other people in and out of the water. Beachcombing, too, is fun as I always find shells and unique rocks. One friend and I typically used to find ourselves napping on the warm sand before we headed home. Lunch at Paradise Cove Beach Café is a full day trip, and it often means getting home to Tehachapi after dark.

Recently I had a different kind of experience in Paradise Cove. One fine Tuesday I was up and ready to leave the house at 4:30 a.m. to take a friend to the Flyaway Bus in Van Nuys, where she could catch a shuttle to LAX. We headed out on the 58 to Mojave, then got on the 14 South; after Santa Clarita we got onto I-5, then onto the 405 to the Sherman Way exit, to the Van Nuys Airport.

By the way, there is heavy commuter traffic all the way on that route at that time of the morning. I was lucky – I only had to slam on my brakes once and I only got honked at twice!

After I saw my friend off at the Flyaway Terminal, I was on my own. And instead of finding a Denny's or IHOP in the area and coming back home right away, I decided to have breakfast at Paradise Cove.

Over I went to the Pacific Coast Highway (via the 405 to the 210 to the One) and headed north to drive along the coast to and through Malibu (more heavy traffic that time of morning, but it slacked off as I neared my destination). Paradise Cove opens at 8 and I got there around 9:15 and found that that is an excellent time to find parking (which, by the way, costs $10 after you get your parking ticket validated with your meal; parking is also available for $30 if you only want to enjoy the beach and not the café, for up to four hours).

I had a choice of indoors or outdoors seating and as it was already very sunny and hot, I opted for indoors by a window. If you haven't been to Paradise Cove lately, note that they have expanded their outdoor eating area and they've moved the (newer, browner) wooden beach chairs closer to the water. They still offer the lounging beds and beach access.

I had a delicious breakfast while enjoying watching the various waterfowl, a paddle surfer, and two board surfers. It was a gorgeous day and after eating I enjoyed some plain ol' beach time. Tide was high and waves were higher, and I was reminded how very much I love being at the ocean. 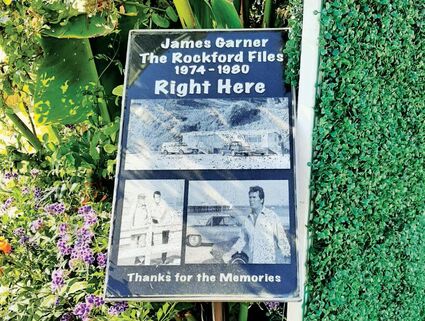 A little plaque tells visitors that Paradise Cove is the home of Jim Rockford.

When I left Paradise Cove, I decided to drive up the coast aways as it was such a lovely day. From Highway One I ended up getting on the 101 North in Oxnard, then catching the 126 East through Santa Paula and Fillmore to Santa Clarita, where I caught the I-5 North. I exited on the 138 just before Gorman and took that to a left turn on 90th Street W (which turns into Tehachapi-Willow Springs Road) to get on home.

All in all it was a long (and early!) day, and I was quite tuckered out when I finally drove into my own carport in the late afternoon. But it was a beautiful day for a drive along the coast and through the agricultural fields in the stretch between Oxnard and Santa Clarita.

Lots of reminders along the way there, too, that there is much more to see and do – not too far from home – so I have more ideas for more day trips in the future.

© 2022 Mel Makaw. Mel is a local writer/photographer, and avid day-tripper and beach lover; she welcomes your comments, questions and suggestions at morningland@msn.com.