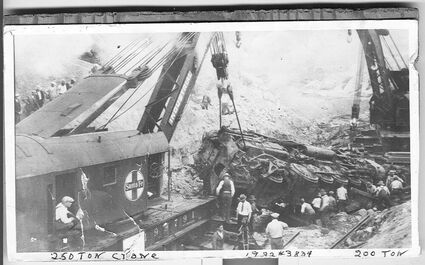 (I wrote an account of the 1932 flood over 30 years ago for the Tehachapi News. I was lucky to find someone who had been in Keene when the waters washed away people, houses and even buried a Santa Fe Engine, as well as washed a Southern Pacific engine off the tracks . I carefully kept notes after talking to Walter Hicks, who was in Keene during the whole thing. I have not added anything to enhance the story; only the facts told me at that time, by Walter Hicks, Laura Ramos, Bob Freeman, Bud Cummings and Dorothy Banducci Perry.)

The morning after the flood, when the waters had subsided, a silent, sodden and tragic scene of destruction was viewed by railroad employees and others who came to help search for missing persons. A man who had climbed atop Mr. Kaad's car, was found alive still clinging to the auto having suffered only a broken jaw. Walter Hicks recalls hearing a plea for help and looked up to see a man in the very top of a tall tree. The water was still swirling around the base of the tree so they called to him to "stay put" until it was safe to come down.

All in all, 31 miles of rails had been badly damaged or entirely washed away along with many bridges, two of them steel, which were left twisted and broken. Repair crews to the number of 1,000 men began to reconstruct the damaged railroad, the utilities and highways. Bridge gangs, track crews, water gangs, signal men, linemen, State Highway crews, truckers, laborers and even transient labor comprised the work crews.

Giant power shovels, pile drivers and railroad cranes were being used to re-establish the railroad beds and highway. The single track in operation from Mojave carried train loads of supplies, materials and machinery to Tehachapi where it was being trucked to vantage points. From the Bakersfield end of the Tehachapi Pass the same activity was being carried on.

After several weeks spent in locating and uncovering the engine it was then necessary to build a special track for the two cranes which would lift the railroad "workhorse" from its hiding place. A clam shell had been used to remove the large quantities of sand and debris in the unearthing of the engine. The 225 ton giant was found lying on its side no more than 15 feet from its original location. (Local lore has, mistakenly, through the years, extended that footage to 150 feet but Walter Hicks, an on-the-site witness verified the actual footage.) It was buried under less than 10 feet of mud and silt. Excavation continued for many days until it was possible, by means of large cranes and cables, to hook onto each end of the locomotive in an attempt to set it upright. Many heavy chains and cables were broken causing delay and frustration plus involving extreme danger to the workers involved. A caption on an existing photo says that one derrick ( a railroad term for crane) used was a 250 ton derrick and the other a 200 ton. At that time the 250 ton crane was touted as being the largest in the world.

Finally, approximately two months after the flood, the enormous locomotive was suspended mid-air by cranes and cables while workmen laid new track beneath it; a highly dangerous endeavor. The track that had been laid beneath it was then connected to the newly laid track on the front and rear of the crippled engine. More time was spent in removing mud and sand from #3834 and then, at last, the once lost engine was taken from its burial site near Keene and transported to the Santa Fe yard in Bakersfield. Its light and bell remained missing.

Some six months later, after the tracks from Bakersfield to Tehachapi had been repaired and replaced, the passenger and freight trains began rolling again between Bakersfield and the desert, much to the relief of the general public, which at that time depended on trains for travel as well as shipping.

The resurrected Santa Fe engine was later brought through Tehachapi on its way back to the factory in Illinois to be repaired. The repairs required over two years and after it was accomplished, the Atchison Topeka and the Santa Fe Railroad advertised the date it would be traveling through the Tehachapi area. On that day many curious citizens turned out to see the veteran of the recent catastrophe. All present cheered and waved as they watched Number 3834 go by ringing its new bell as it passed through.

Reminiscences of a few local citizens:

Tehachapi lifetime resident, Laura Ramos, who was 12 at the time, recalled sitting on the front porch of her parent's home in the pitch black night; the electricity being out. She was able to glimpse, during flashes of lightening, the rolling, churning waters roaring past her home on G Street (Tehachapi Boulevard) and wondering if it would finally rise high enough to reach where she was.

Bob Freeman, a lad of 14 in 1932, who lived in the old Freeman home on Green Street, said that the flood waters stood 10 inches in his back yard. A flock of pet pigeons he had been raising was soon washed away. The house was not flooded because the "old timers," he said, built them high off the ground in anticipation of any flash floods that might occur. 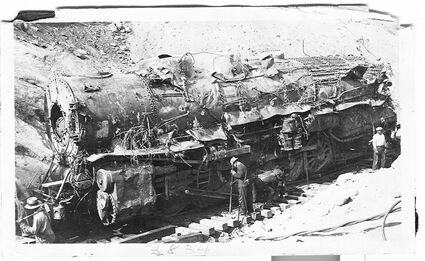 Santa Fe locomotive #3834 on tracks after being lifted.

Mary Watts (Farrell), then, a young fifth grader, and daughter of Margaret and Al Watts said that her father had called from his butcher shop saying he was watching the rising waters flowing down the main street. If they got any higher, he said he would be coming to take them from their home across the tracks, to higher ground. He would also take their neighbor Minnie Mathiesen if it became necessary. To allay any childhood fears, their mother, Margaret, said she'd make them popcorn until she realized her electric popcorn popper wasn't much good with the electricity off. The waters did not rise over the railroad tracks and the little family was safe.

Bud Cummings, direct descendant of the early Cummings Valley settlers, said that he was ready to begin construction of an adobe house the next day but the heavy rain left him with a pile of mud!