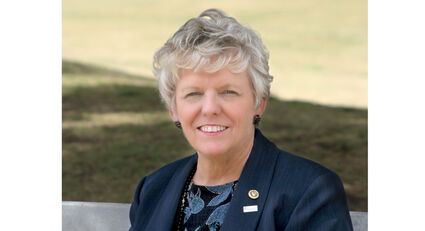 Cerro Coso Community College is deeply saddened by the loss of former President Dr. Mary E. Retterer. She passed away on Sept. 8 in Gardnerville, Nevada.

Dr. Retterer became Cerro Coso's sixth President on July 1, 2007, after serving as Interim President for one year. She retired in June of 2010.

Her time as the president left a lasting impact on Cerro Coso Community College and the communities it serves.

She was a dynamic leader with a wealth of experience in community colleges, including colleges with centers in rural areas. Her prior experience with the California Community College System provided a valuable foundation from which she led the college in a strategic direction to meet the needs of the college's diverse service area.

Her 35+ years in education included three years of administrative service to California Community Colleges. Prior to assuming the interim assignment at Cerro Coso, she served as the Superintendent/President of Shasta-Tehama-Trinity Joint Community College District, from June 2004 to 2006. She was President of Pima Community College's East Campus, in Tucson, Arizona, from August 1998 to June 2004.

Her administrative career began in a variety of positions that were part of the Minnesota State Colleges and Universities System, including President of Ridgewater College in Wilmar and Hutchison. She also served as Interim Regional President, Arrowhead Community College Region, and Interim President Minneapolis Community College, as well as Dean at the Rainy River Community College in International Falls.

Dr. Retterer began her educational career teaching at California State Polytechnic University, Pomona in 1980. She taught business and accounting in the San Bernardino Community College District from 1981 to 1993, and at the University of Texas at Austin.

Dr. Retterer was at the college when it received a $250,000 grant from the State of California to strengthen Career Technical Education (CTE) programs through "Project Lead the Way," in partnership with Sierra Sands Unified School District and the Naval Air Weapons Center, to meet the future workforce needs of our region. She was here when the Mammoth Lakes Foundation broke ground for student housing, and when the college held its first Phi Theta Kappa induction ceremony. She led the college through a very important accreditation review and created a collaboration between the college and the IWV Water District on a large scale water conservation project on the Ridgecrest Campus. She was an expert fundraiser and started many of the college's signature events like the Star Party and Denim and Diamonds to help support the college and its students. Her accomplishments were many and her legacy will live on in so many ways at Cerro Coso Community College.

She once referred to Cerro Coso as a "diamond in the dessert" and stated how proud she was of the people within as she looked to an exciting future here. She noted the tremendous creativity of the college's employees and looked to "harness that creativity and turn it into growth and improved service to all the communities within the college service area." She was an essential part of our institution's history, and spent a lifetime being an influential advocate for education. "I had hoped to personally meet Dr. Retterer at some of our 50th Anniversary activities beginning next year," said current President, Dr. Sean Hancock. "And I am sad that I will not get that opportunity."

"Like myself, Dr. Retterer was a former community college student," said Hancock. She earned an Associate of Arts Degree from Craft Hills College, California. She transferred to California State University, San Bernardino, where she received her Bachelor of Arts degree in Administration with a concentration in accounting, and a Master of Business Administration Degree, with a concentration in accounting. She earned a Doctorate of Philosophy in Educational Administration, Community College Leadership Program from the University of Texas at Austin.

"Cerro Coso honors the legacy of Dr. Retterer, and mourns her loss alongside her husband Richard, family, and friends," said Hancock.

A celebration of life will be held for Dr. Retterer at the Elks Lodge in Gardnerville, Nevada.