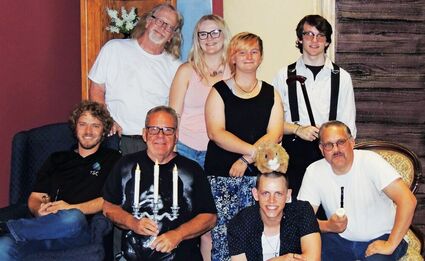 The cast of upcoming play "Bakersville."

Who killed Sir Charles Baskerville? Is there any truth to the legend of a supernatural hound? This sounds like a case for the famous pipe smoking detective. Join Sherlock and Dr. Watson as they try to untangle a web of clues, disguises and deceit. Can they solve the mystery before the killer strikes again? Will it be elementary, Watson?

Ask David Stenstrom what he's always wanted to direct, and his answer would be the next one. As it happens, the next one is "Baskerville" a comedy-based one of Sherlock Holmes greatest mysteries. His enthusiasm for the production is on full display as he oversees rehearsals at the BeeKay Theater. Whether he's quoting Shakespeare or channeling a caveman storyteller, David keeps his cast on track for the September season opener. From Missouri to Pine Mountain Club to Tehachapi, he brings 50 years of experience in stage, film and television. This is round two for the director and here in his corner, once again, is Assistant Director Lisa Meridth. Her organizational skills are crazy good, and Lisa is ensuring that all the pieces of this wonderful show fall into place. A stage production requires a team of dedicated volunteers, including audio/visual, costuming and set design/construction.

Jason Wheeler is in nearly every scene playing Dr. Watson and as a seasoned actor, he's impressed with how much talent the newer actors are bringing to the stage.

Versatile Lanie Ringle keeps up the pace with a multitude of character and scene changes. Baskerville features seven actors playing 40 plus characters, dozens of light and sound cues and a multimedia backdrop. Sound complicated? Let David narrow it down for you, "If you can get your audience to react, to laugh, that's everything. The story is everything." Rounding out the talented cast and playing many roles are Adam Dyer, Dave Faber, Thomas Ingram and Lily Bouldin.