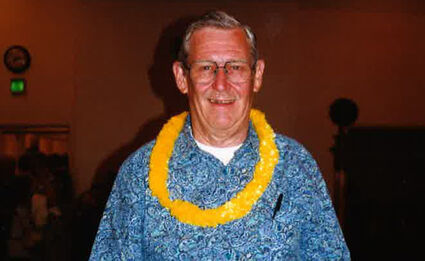 Beloved husband, father and grandfather left us on Aug. 2 in Tehachapi.

David was born in Biddeford, Maine on July 4, 1934 to Elsa and David Kennedy. He was the youngest of four. He is predeceased in death by his parents and three older siblings.

He is survived by his wife, Judith and his children, son David Mark (Diana), daughter Elizabeth and beloved granddaughter Charlotte.

David moved to California in 1957, working in the aircraft industry his entire working career, first as a machinist and then as a quality control engineer.

He met and married his wife Judith in 1960. Thus followed 62 years of happy times and many sweet memories.

David retired in 1997 and moved to Tehachapi opening a world of many new friends, iris gardens and travel.

A memorial service will be held at Woods Family Funeral Home on Sept. 24, followed by a Celebration of Life at the Tehachapi SENIOR CENTER.

David will be laid to rest at Laurel Hill Cemetery in Saco, Maine in the spring.

Contributions in his memory may be made to Bristol Hospice Foundation, 1227 Chester Ave., Bakersfield, CA 93301.