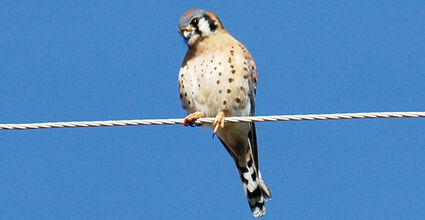 Kestrels are so small that they are perfectly comfortable perched on power lines, while larger raptors like Red-tailed Hawks typically only perch on the poles or crossarms.

One of the most common raptors in the Tehachapi Mountains is a small falcon that is only a slightly bigger than a cockatiel, but it has sharp talons like curved ice picks, a hooked bill and a fierce little dark-eyed stare: the American Kestrel.

American Kestrels (Falco sparverius) are North America's smallest falcon, and also the most widespread one. These little raptors are primarily birds of open areas, and they can commonly be seen perching on power poles or the crossarms at the top of poles. They are even comfortable perching on the wires themselves, which is behavior you seldom see from any of the larger raptors.

There are four members of the Falco genus that can at least occasionally been spotted in the Tehachapi Mountains: American Kestrels, Merlins, Prairie Falcons and Peregrine Falcons. The term falcon derives from the Latin word falcis, which means "a sickle" and refers to the way that their sharp curving talons resemble a traditional sickle or reaping hook.

Years ago I helped a noted biologist named Dick Anderson trap and band kestrels, and I immediately gained respect for these pint-sized raptors, as they repeatedly drew blood from the puncture wounds they inflicted on my hands with a quick squeeze from their slender talons.

An old name for American Kestrels is sparrowhawk, and they do sometimes prey on small songbirds – the ornithological name sparverius is Latin for "sparrow." However, they more commonly eat insects and other invertebrates like grasshoppers, beetles, moths, dragonflies, cicadas, etc. In addition to birds, kestrels will also eat small vertebrates like lizards, mice, voles, small snakes and frogs.

Kestrels exhibit some of the most marked sexual dimorphism, or visible differences between males and females, of any North American raptor species. Males, as is typical of birds, are the more colorful of the two, with slate-blue wings and head, and a rusty orange back with black barring. They also have two dark streaks down each side of their face. The front mark is sometimes referred to as a "tear streak" or "moustache" mark and the back one called "sideburns."

Female kestrels have the same facial streaks, though typically less pronounced, with streaked bellies and a tawnier, reddish overall appearance without much of the male's slate blue coloration. Females, like most raptors, tend to be slightly larger than males, and may target somewhat larger prey.

American Kestrels are about nine inches long, from their tail to their beak, and have a wingspan a little less than two feet. Like other falcons, their wings are pointed and slender. They can be mistaken for a Mourning Dove when perched a distance away, but kestrels have larger heads and they tend to bob their tails when perched, which pigeons and doves typically do not do.

As I mentioned, American Kestrels tend to prefer open areas without too much tree cover, like fields, meadows, farmland, savannahs, golf courses, desert, low shrub land, etc. They do utilize trees, snags, fenceposts and poles for perching, but aren't generally found in areas that have heavy tree cover. Kestrels like to be able survey their surroundings from a perch with good visibility.

Despite being fierce for their diminutive size and predatory themselves, kestrels are vulnerable to predation by larger raptors like Cooper's and Sharp-shinned Hawks, Barn Owls, Northern Goshawks, Red-tailed Hawks, etc. So they must not only keep an eye out for prey, they must scan the skies and their surroundings for larger hunters than themselves.

When hunting on the wing, kestrels often hover in place, peering at the ground below to catch an actionable glimpse of insects or other small prey. If they do, they suddenly dive and seize their prey with outstretched talons.

Unlike humans, falcons appear able to see in the ultraviolet spectrum, so they can spot the ultraviolet light given off by the urine traces that voles and mice leave along their paths and trails through the grass. By hovering overhead, kestrels can see the outline of the rodent roads, and zero in more effectively on the areas where a mouse or vole is most likely to be spotted and grabbed. 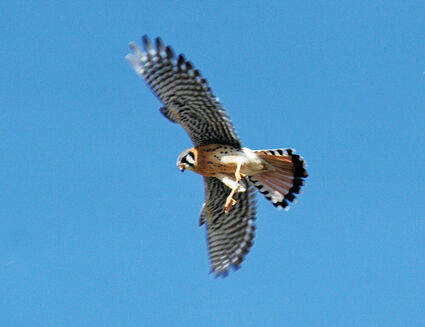 An American Kestrel hunting on the wing, hovering above a field where potential prey can be found.

American Kestrels are endearing birds with their attractive markings, agile flight and seasonal calls, uttering a shrill Klee! Klee! Klee! They can be assisted by providing nest boxes for them, which are available online as either plans for building your own, or as completed boxes that are ready to mount. Organic farmers now put up kestrel boxes to try to attract the little raptors for the insect and bird control services they provide. Healthy grasslands and open space are definitely enhanced by the presence of kestrels. . . .