Downtown Randsburg is full of period storefronts honoring the town's past.

I got another hankering the other day, this time for an authentic old-fashioned chocolate malt. And my favorite get-away place to get such a thing is the General Store in Randsburg, California.

So, off I went on one of my favorite day trips – a drive through the desert and up into the mountains to Randsburg, known lovingly as a "living ghost town." 2020 census says the population is now 99 but it is more known for its plethora of old abandoned buildings and artifacts, most of which are left over from the Rand Mining District boom town days over a hundred years ago.

I've been visiting Randsburg for almost 30 years on a semi-regular basis, ever since my folks introduced me to the town and the General Store's soda fountain late in the last century. I've seen a few changes and several different owners of the store over the years, but so much remains the same that it's always like a step back in familiar time to go there for my yummy chocolate malts.

If you go, take the 58 east and then go north on the 14, about a mile and a half past Jawbone Canyon, take the Garlock Johannesburg turnoff to the right (east, onto Redrock-Randsburg Rd.). About 12 miles on that road you'll bear right at a Y in the road, toward Randsburg (still on Redrock-Randsburg Rd.). About 10 miles more on that road and you'll find yourself in downtown Randsburg, such as it is.

There are three paved streets in Randsburg – Burma, Butte, and Lexington – and Butte is the main street, the one in the middle. It is also the location of the General Store, a bar called The Joint, the White Horse Saloon (now closed), the Cottage Hotel Bed & Breakfast, a small museum and several antique and junk stores. I do like to poke around in the few stores that are open, but as far as I'm concerned, the General Store is the main attraction (along with driving up and down all three streets to see what creative and sometimes humorous yard art the residents have put out).

Despite three fires and rebuilding, the Randsburg General Store has been in continuous operation since Nicholas Millar (originally from Michigan) opened the Randsburg Drug Store on the site in 1896. Every subsequent proprietor has retained the rustic and original ambiance of the store.

Marcy Holbrook, who ran the store for a few years, once told me that the store is "exactly the way that it was a hundred years ago; just about everything is original." Including the antique marble soda fountain, which was brought to Randsburg from Boston, where customers like me can enjoy malts and shakes made with a 1939 Hamilton Beach mixer.

Current owners Carol Dyer and Brad Myers (who go by "Carol King" and "Brad Pitt" respectively, just for fun) have kept things original, with one exception: the LA-based couple added a small surf shop in the back, making it, as Brad proudly states, "the only surf shop in Randsburg." It may not be a requirement to have a sense of humor to live and work in Randsburg, but it surely helps. And it surely makes visiting there a fun experience.

Unfortunately most of the shops and the General Store are only open on weekends these days – Friday, Saturday and Sunday; the store is open 10 a.m. to 4 p.m. – so take that into consideration if you go. And be aware that Randsburg is a great gathering spot for off-roading enthusiast and RVers during the weekends and holidays. I was there on a Sunday afternoon recently and it wasn't too busy this time, but I have been there before when it was a hopping place. 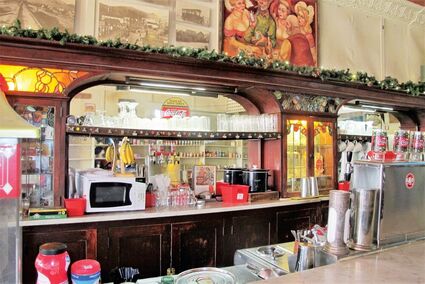 The old-fashioned soda fountain is a great reason to visit the General Store in Randsburg.

Note: The 20th Annual Old West Days is currently being planned for this year and will be held on the third weekend in September (Sept. 17). That is typically a very fun, family day trip, if you're inclined to plan ahead a little.

Meanwhile, if you get a hankering for a delicious malt or shake experience – or a sit down lunch of their "famous" pulled pork sandwiches – consider a trip to Randsburg. I don't know if the surf shop will catch on as well as the old fashioned soda fountain in the General Store has but hey, in Randsburg it seems that anything goes... which is reason enough to visit the place now and then!

© 2022 Mel White/Mel Makaw. Mel is a local writer and photographer, an avid day-tripper, and a lover of chocolate malts; she welcomes your comments, questions and suggestions at morningland@msn.com.