By Greater Tehachapi Chamber of Commerce 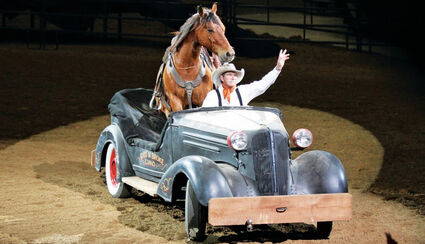 Bobby has a career rich in western heritage that spans over 50 years. Born in Ontario, Canada, Bobby's passion for horses and the western lifestyle led him to pursue his dreams of training and showing in Cutting, Reining, Roping and Working Cow Horse. Currently he spends most of his time on the rodeo and horse show circuit demonstrating how usable, trainable and amazing American Mustangs are.

2021 Inducted into Texas Cowboy Hall of Fame, PRCA Specialty Act of the Year.

A 16-year-old mustang gathered in Callaghan Range, Nevada. Competed in the 2011 Supreme Extreme Mustang Makeover. He was voted Fan Favorite with twice as many votes as anyone else! Since then, Poncho has performed across the country in hundreds of performances. He has ridden in his car on Times Square in New York City and been featured on "Good Morning America."

A 13-year-old mustang gathered in Salt Wells, WY. After only 120 days training, he placed 2nd in The Mustang Million makeover in 2013. Since then, he has performed in hundreds of venues including rodeos and equine events.

A 7-year-old mustang gathered from Devils Garden herd in the Modoc Forest, CA. Newt has done mostly liberty but is now an important part of the act and can ride in the car also.