'RUTAN FIELD' is on Aeronautical Charts 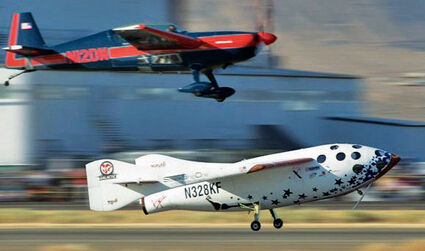 The push to name Mojave Airport "Rutan Field" began in August 2018, when a letter was written to then General Manager/CEO Karina Drees, requesting an opportunity to address the Mojave Air & Space Port Board of Directors.

Cory Bird, now President of Scaled Composites, was the first person to make a presentation requesting that this historic airport be named "Rutan Field" noting all of the achievements of Burt Rutan since he located his first business, Rutan Aircraft Factory at Mojave Airport in 1974.

Zach Reeder stated, "It wouldn't be a space port if it hadn't been for Burt Rutan!" Reeder was a test pilot and Project Engineer at Scaled Composites and later at Stratolaunch. At Scaled, Reeder flew the Firebird Demonstrator, Proteus and Task Vantage in addition to a Baron, Duchess, Extra 300 and L-39.  He also restored Burt Rutan's record setting Catbird aircraft in 2011 and still flies it today.

At the first board meeting of 2022, Jan. 18, Directors of the Mojave Air & Space Port voted unanimously to approve a resolution officially changing the name of the airport by adding the Rutan name. During discussions at the meeting, the introduction of the new name will be done gradually. General Manager/CEO Todd Linder said, "The plan is to start with the items that are most visible to the public, such as the monument signs at the entrances of the airport."

The five Directors for the MASP Board include: Jim Balentine; William Deaver; Diane Barney; Chuck Coleman and Robert Morgan. Barney was elected to serve as the new President of the Board.

According to the staff report, "Adding the Rutan name to the facility would recognize aerospace designer Burt Rutan and his record-setting brother Dick. Their aviation achievements have played a key role in the evolution of the aerospace industry and the success of the Mojave Air & Space Port organization."

Many thanks to CEO/General Manager Todd Linder for working with the FAA (Federal Aviation Administration) to accomplish the mission of putting "Rutan Field" on the Aeronautical Chart with the Mojave Air & Space Port name.

It is important to note that requests were presented four years ago to add the Rutan name to Mojave Airport and in previous board meetings and discussions, Dick Rutan and others even emphasized the importance of how the Rutan name must be recognized by the FAA (Federal Aviation Administration). Giving examples of Burbank's Bob Hope Airport and Orange County's John Wayne Airport.

In 2019 at the January Mojave Air & Space Port board meeting, then General Manager/CEO Karina Drees announced that there was a request for a discussion item to be brought to the attention of the MASP Board. She stated that she had been approached by a couple of people including Cory Bird, who then served as Vice President and now serves as President and CEO of Scaled Composites, along with other members of the airport community, about adding the name "Rutan Field" to the Mojave Air & Space Port name.

Rutan came to Mojave in the mid 1970s looking for a location he could afford for his innovative Rutan Aircraft Company, known to home builders as RAF.

Two of RAF's first employees were Mike and Sally Melvill. They worked for Rutan for 29 years before retiring in 2007. They reside in Tehachapi.

Sally Melvill attended the 2019 board meeting and said, "I don't think anybody needs convincing that Burt's name needs to be here. I don't think that's what it's about. I think it's more about where and how we can do that. Literally, the name 'space port' would not be there if it was not for Burt. The recognition is what's needed."

Zach Reeder, who served as a Flight Test Pilot and Project Engineer at Scaled Composites StratoLaunch that year said, "The benefit of changing the name is to remind ourselves what we're doing here, especially as the airport has grown. Having a stake in the ground to try to remember some roots while some of the people who were here at the beginning are still around to remind us."

Reeder reiterated that people have come here for that "nugget of vision" that has been cultivated through the years and that we run the risk of losing our agility if we don't keep promoting the rarity that attracts creative industrial anomalies and it is up to this board as to what we want to leave behind for the next generation and what it means to the community.

Chuck Coleman, Bob Morgan and Diane Barney were instrumental with the name change, as well. They ran for a seat on the airport district board especially to ensure that the Rutan brothers be significantly recognized.

Coleman often said, "What would the Mojave Airport look like now if Burt had decided NOT to set up his base with RAF, then Scaled."

During SpaceShipOne flight tests and the Ansari X-Prize flights, Coleman piloting his Extra 300, was one of the official chase planes.

Coleman is an airshow performer and a certified flight instructor with over 3,000 hours in the Extra 300 series aircraft.

Bob Morgan has worked with Burt Rutan for decades as an aeronautical design engineer. He was lead engineer for White Knight Two.

Diane Barney, always a fan of the genius of Burt Rutan and worked at Scaled Composites when she first came to Mojave in 2015, now serves as President of MASP Board of Directors. She is an aircraft owner, general aviation private and commercial pilot; aerospace flight test engineer, U.S. Air Force veteran; recently earned her MBA and has her own engineering consulting business.

CEO/General Manager, Todd Lindner gave the final push and worked diligently with the FAA to get "Rutan Field" on the aeronautical charts. "It took another six months after the board had approved the change but it's completed now," Lindner said.

After such a long wait this is a welcomed sight for the all who have worked with and admired the accomplishments of the Rutan's around the world.

In an email, Sylvia Jutila, Voyager Volunteer said, "Seeing 'Rutan Field' listed on the aeronautical charts is well deserved recognition for Dick and Burt Rutan, and George and I are grateful to see it happen while both brothers are still living." Dr. George Jutila, was the Voyager Flight Surgeon.

Rutan established his business at Mojave in 1974

Rutan Aircraft Factory began business at Mojave Airport in 1974, developing the Vari-Eze aircraft, later Burt Rutan design's made first flights at Mojave Airport, including: the Quickie, Defiant and Long-EZ prototypes and the one and only Voyager aircraft. The Voyager was piloted by Dick Rutan and Jeana Yeager. It made the epic flight around the world in 9 days, 3 minutes, 44 seconds, beginning on Dec. 14, 1986 and ending on Dec. 23, 1986.

Burt Rutan retired from Scaled Composites in 2011. Burt and his wife, Tonya; and Dick with his wife, Kris, now all reside in Coeur d`Alene, Idaho. 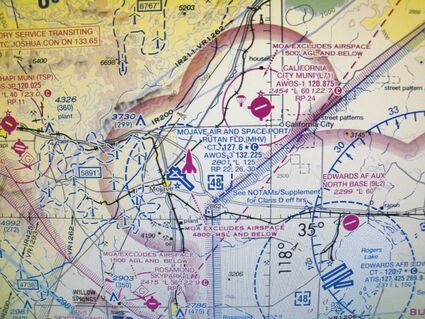 Dick Rutan, Voyager pilot, relayed this message in an email, "In the unlikely setting of the desolate high desert of Southern California, the Mojave Airport would become an oasis which was destined to attract some of aviation's most talented innovators and test pilots. Its open skies, remote location, freedom from bureaucracy and supportive management policies made it the perfect venue for creativity and innovation. It you had an idea, you were encouraged to come test it. It wasn't considered a crime to fail, however, it was considered a crime not to try. In that environment, technology advanced, long-range records were set and civilian astronauts were created."

"It is an honor to see the Rutan name on the new aero charts, and I am thankful to all who worked relentlessly to bring that to fruition," said Rutan.