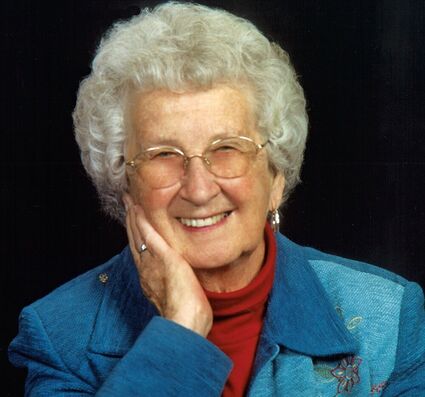 It's hard to summarize the long life of this amazing woman, my Mom. She was born in Oklahoma City, Oklahoma, the youngest of nine kids, raised in Buckeye, Arizona, but moved to Southern California at the ripe old age of 17.

She married Carl Jordan at 18, worked for the Federal Port of Embarkation, the Federal Immigration Service, Rohr Aircraft, the County of Riverside and the Calif. Dept. of Corrections. She found time for her daughter, me, my husband Ted, her son Dennis, his wife Sue, and grandkids (Clinton, Monica, Anthony, Dana, Kathryn, Amie, Andrew, Alison, Luke) and great-grandkids (Emily, Jordan, Marley, Jackson).

After she retired from CCI-Tehachapi she and dad began traveling all over the United States. Mom loved to travel and learn about new places. She was the most curious person I ever knew. She always asked questions and wanted to know "why" and "how" about everything. She got interested in finding her Irish family history (before the days of computers) and mailed hundreds of letters across the country to compile the Fanning history. She was very happy to uncover family members, Nathaniel and Edmund Fanning, seamen during the Revolutionary war era, and Robert Morris, a signer of the Declaration of Independence.

When dad died after 49 years of marriage, she decided to see the world. Dad was only interested in traveling in America and one trip to Ireland. That wasn't enough for Curious Ruby. She spent 20 years discovering the world. She went piranha fishing on the Amazon, was baptized in Israel's Jordan River, cruised down the Nile, ate pizza on Thanksgiving in Casablanca, walked thru Petra, sat on the real Santa's lap in the northern part of Finland, toured a leper's colony in South America, had an anaconda wrapped around her neck on the Amazon, took a 42-day cruise to China as the only passenger on a freighter, had a stare-down with a very scary lion on safari in Africa and rode a motorcycle through the streets in Cambodia. You get the picture.

She visited 59 countries, mostly alone. On each trip, she kept a very detailed journal. When we read her journals, it was like we made the trip with her. Over the years we tried to convince her to write a book, but she wasn't interested. I think it would have been a best seller! When mom started slowing down, I asked her what she would like for people to know about her. She wrote this note:

"Although there have been some hard bumps in my life, I'm fortunate to have had a life of good times, excitement and a whole lot of love. Being from a good, honest, and caring family has been a great asset. Being from the best country in the world has helped me be who I am. And so, rather than a lot of beautiful flowers on my casket, I want my special flag draped over it. It flew on the new USS Gerald R. Ford ship on its maiden voyage, and 'my flag' proudly waved over it honoring Ruby Fanning Jordan. Now comes the most exciting adventure, that of meeting God face to face. Many friends and family members will also be there to greet me. Don't be jealous - just meet me there someday."