[Editor's note: This is the continuation of our 32nd article, from our June 25, 2022 issue, in a continuing series about local military veterans and their service to our great country. The articles may contain graphic content. Reader discretion is advised.]

(Raymond W. Permenter and Herbert L. Bayless are two local heroes inextricably bound together in the history of Kern County. Born on the same day, they both attended East Bakersfield High School [EBHS] in the late 1930s and early 1940s. Co-captains of the football team, they both joined the Army Air Forces (AAF) in the spring of 1943 to fight for the country they loved. Both were killed in action in 1944.)

Herb Bayless was also born in Bakersfield on February 20, 1925, the son of Max Bayless, Sr., and Ruby Caroline Bayless. Herb had two siblings-an older brother Max Jr., and a twin sister, Charlotte. Max Jr. would also serve as an officer in the AAF during World War II and, unlike his brother, would live to the ripe old age of 81.

One might say that Herb "tore it up" during his time at East Bakersfield High School. He served as the student body president in 1942 (the year he graduated) and was a member of the school board of commissioners. He was active on the debate team and played on the swim and football teams. East High was very young (it was built in 1938), and Herb was always a participant, and sometimes a leader, when it came to establishing school traditions, guiding principles and ideals. Indeed, he was deeply involved in framing the student body constitution, selecting the school colors and writing the school songs. He also helped with naming the school's sports teams ("Blades," "Daggers," "Dirks") and establishing them adversaries to be respected and feared.

As Herb's former sister-in-law, 99-year-old Joyce Bayless, recently told this author: "Herb was exceptionally brilliant and wanted to be a corporate lawyer." Decades earlier, Don Shoup, his former football coach, recalled the "steady and purposeful look in [Herb's] eyes when I talked with him about his plans of entering the legal profession." Coach Shoup also told of the time when Herb-who worked summers as a lifeguard-"saved a lad's life from drowning in one of the city plunges [swimming pools]."

(Note: Forgive the digression, but one can only wonder what life must have been like "back in the day." "Many of the guys left high school to join the service," reminisced the late Helen Smith (a member of East High's first freshman class) in 2013. "After the Japanese bombed Pearl Harbor, we were instructed to go to the auditorium. We listened to the radio live as FDR announced that we had declared war. We were stunned." Of course, the odds are good that both Herb and Ray were also in the auditorium that day.) (Donna Cazacus, "East High at 75: A trip back in time," Bakersfield Californian, October 5, 2013.)

While enrolled at Bakersfield Junior College, Herb enlisted in the Army Air Forces in March 1943. After training in California, Arizona and Texas, he received his silver wings when he graduated from AAF advanced two-engine pilot school at Marfa, Texas, in February 1944, a newly-minted 2nd Lieutenant. In the summer of 1944, now promoted to 1st Lieutenant, he was assigned as a B-24 "Liberator" bomber pilot to the 506th Bomb Squadron, 44th Bomb Group, 8th Air Force. Stationed at Shipdham, U.K., the group flew strategic bombing missions over Germany and occupied Europe; facing determined enemy opposition, by April 1945 it had conducted 343 missions and won two Distinguished Unit Citations while dropping nearly 19,000 tons of ordnance. These impressive statistics were only achieved at a material cost of more than 150 aircraft, and a human cost of some 2,000 airmen.

By the beginning of December 1944, Lt. Bayless had piloted his B-24 on 26 missions-all daylight raids that exposed the bomber crews to great danger from enemy anti-aircraft (flak) fire and the fighters of the Luftwaffe (German Air Force). While records of his specific missions could not be located, a meticulously organized and marvelously detailed internet site ("A Big Data History of the 44th Bomb Group") offers brief histories of every mission flown by the 44th Bomb Group during WWII. Thus we see that, in November 1944, the group's targets included: synthetic and crude oil refineries, marshalling yards, tactical targets in support of General George Patton's 3rd Army, railroad viaducts, tunnels, and bridges.

One of the targets struck in late November was the Bingen marshalling yards. On Dec. 2, elements of the group (about a dozen planes) departed their base at Shipdham to take part in a second raid against the yards at Bingen (a German town on the Rhine River). Lt. Bayless and his crew flew on this raid. It would be their final mission of the war.

The fateful day began on a discordant note for Herb and his crew. They had not been assigned to the Bingen operation the preceding night and were less than pleased when abruptly awakened at 3:30 a.m. and told they were to lead the 392nd Bomb Group on the mission. As one crew member recalled: "The reason we were given was that there was a possibility of bad weather over the target area and a bombardier who had been checked out for G-H bombing was needed. I had been checked out for G-H. We were told that no bombardier in the 392nd had been. I didn't believe that then and still don't." (Note: G-H, or Gee-H, was a radio navigation bombing system introduced in late 1943; it remained in use through the end of the war, although subject to German jamming.)

After being fully briefed, the mission got underway early that morning. Despite lacking pathfinder equipment, including flares for marking targets, Herb's plane was leading the low left squadron of the 392 BG. As noted in an official report, the weather was bad, visibility poor. Shortly after passing the I.P. (initial point, or the last navigation way point before start of a bomb run), between 1246-1250 hours, Herb's plane and the entire squadron passed through heavy cloud banks that broke up the entire formation. Fortunately, flak was meager and inaccurate over the target area, but enemy fighters were observed. Bombing was done by Gee-H (a radio navigation system introduced in late 1943) with unobservable results.

When Herb's plane emerged from the cloud banks, it was separated from the other aircraft and came under attack from Bf 109 Messerschmidt fighters (and possibly from Focke-Wolf 190s as well). One or more 20mm cannon shells exploded just under the bomber's flight deck. Flames erupted immediately, followed by explosions. Although Herb and his co-pilot struggled to maintain control of the aircraft, it soon flipped upside down and entered a flat spin. The plane broke apart and plunged to the ground near the town of Schwarzerden.

While most of the crew was able to escape the burning and disintegrating aircraft, only four survived while five men perished; among the latter was Lt. Bayless. Shortly after the war, one of the surviving crew members, co-pilot Lt. Victor P. Louisa, wrote to Mrs. Bayless: "As you probably already know, I was flying co-pilot for your son, Herb, the day we were shot down over Germany. . . We were attacked by German fighters . . . soon after we dropped our bombs on our designated target and our plane caught fire at once. We tried to go on but to no avail so the escape hatch was opened and we started bailing out. . . I helped your son Herb out of the hatch since it was almost impossible for a man to get out without any help. Just as he was about out, the plane gave a lurch and from there on I can't say what happened as I was knocked unconscious after striking my head against the armor plating of the pilots' seats."

Lt. Louisa and the other three survivors of the plane crash became prisoners-of-war in Germany-three of them being sent to Stalag 1, and one to Stalag 4 (Stammlager = German permanent POW camp); all four men survived their captivity and returned to active duty. The remains of Lt. Herbert Bayless were first buried in Kellenbach, Germany; in late 1948, they were returned to the United States aboard the Army transport Carroll Victory. Herb's remains found their final resting place at Greenlawn Cemetery in Bakersfield.

In 1949, the board of commissioners' meeting room at East Bakersfield High School was dedicated as Bayless Hall to honor Herb's memory. Pictures of all past student body presidents were hung in the hall. 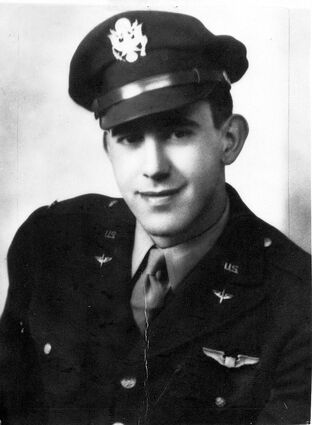 While unable to attend the ceremony that day, Russ Kniffen, a former classmate of Herb's, wrote in a letter to the school principal: "We can be gratefully proud today, that fellows like Herb had what it takes to keep intact the great American spirit that our forefathers have fought for so many times. Herb did not make the supreme sacrifice in vain. Let us all hope that our journey in life will be as beneficial to democratic society as that of Herb's."