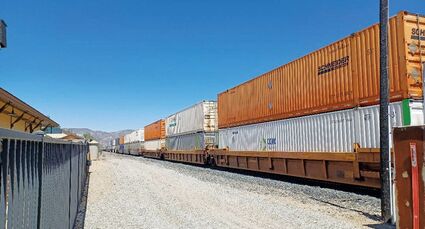 Double stack containers may be carried on flatcars or well cars that are specially designed for container transport, and can accommodate double-stacked containers

Containers are transferred between rail, truck and ship by container cranes at container terminals. Forklifts, reach stackers, straddle carriers and cranes can be used to load and unload trucks or trains outside of container terminals. Swap bodies, side lifters, tilt deck trucks and hook trucks allow transfer to and from trucks with no extra equipment.

Standard containers can be handled and lifted in a variety of ways by their corner fixtures, but the structure and strength of 45-foot containers limits their tolerance for side-lifting and they cannot be forklifted.

By the 1830s, railways across several continents were carrying containers that could be transferred to other modes of transport. These simple rectangular timber boxes, four to a truck, were used to convey coal from the Lancashire collieries to Liverpool, where they were transferred to horse-drawn carts by crane. Early versions of standardized containers were used in Europe before World War II. Construction of these containers had a steel frame with wooden walls, floor, roof and doors. Today, weight and dimensions of the most common types of containers are 48-foot and 53-foot. Containers have not been incorporated in the latest, 2020 edition of the standard maximum gross mass for all sizes, except the 10-foot boxes were raised to 79,000 pounds. Given the average container lifespan, the majority of the global container fleet has not caught up with this change yet. U.S. highways cannot handle such heavy, fully laden containers yet, including the mass of tractor trailers. The legal maximum cargo weights for U.S. highway transport and those based on use of an industry common tri-axle chassis. Cargo must also be loaded evenly inside the container, to avoid axle weight violations. The maximum gross weights that U.S. railroads accept or deliver are 52,900 pounds for 20-foot containers, and 67,200 pounds for 40-foot containers. In the U.S., containers are loaded up to the rail. Cargo weight limit cannot move over the road, as they will exceed the U.S. 80,000 pound highway limit.

On average, railroads are three to four times more fuel efficient than trucks. That means moving freight by rail instead of truck lowers greenhouse gas emissions by up to 75%, on average.

In 2020 the cost to combine rail and truck using a bulk transfer terminal was approximately $95.54 per net ton. By comparison, rail direct is $70.27 per net ton, and over-the-road truck is $214.96 per net ton. Using multi-modal rail and truck transit compared to truck alone, you can cut transportation costs by more than half or more by double stacking on the trains.

The Train Depot Museum in located at 101 W. Tehachapi Blvd.