[Editor's note: This is the 32nd article in a continuing series about local military veterans and their service to our great country. The articles may contain graphic content. Reader discretion is advised.]

(Raymond W. Permenter and Herbert L. Bayless are two local heroes inextricably bound together in the history of Kern County. Born on the same day, they both attended East Bakersfield High School [EBHS] in the late 1930s and early 1940s. Co-captains of the football team, they both joined the Army Air Forces (AAF) in the spring of 1943 to fight for the country they loved. Both were killed in action in 1944.)

Ray Permenter was born in Bakersfield on February 20, 1925, the son of Balner (Tony) and Jessie (née Barulich) Permenter. He had two older siblings, Barbara born in 1920 and Walter in 1923. An outstanding characteristic of the Permenter family was their love of sports and competition, with Tony finding work as a baseball umpire in the old Pacific Coast League (he also umpired local high school and college baseball games) and both his sons making their mark as outstanding local athletes. The family also evinced a noble tradition of military service, which included a relative, Owen Leland Permenter, whose fighter plane went down in waters off the Aleutian Islands in World War II (neither his plane nor his remains were ever recovered).

At East Bakersfield High School, Ray was a three-sport letterman – an all-county halfback on the football team, an outfielder on the baseball team, and an all-county guard on the basketball team. For his athletic prowess he is best remembered as the player who in 1941 scored the first ever "Blade" touchdown against rival Bakersfield High School, intercepting a pass and taking it 68 yards for the score. He also served as vice president of the Letterman Club, having become the first EBHS student-althlete to earn 12 athletic letters.

Ray enlisted in the Army Air Forces in April 1943, and was sent to gunnery school at Laredo Army Air Field, Laredo, Texas. Following his training, he was assigned to the 485th Bomb Group (15th Air Force) as a waist gunner on a B-24 "Liberator" bomber. The B-24 was one of the primary AAF heavy bombers of WWII, but was overshadowed by the sleeker and more popular B-17 "Flying Fortress;" that said, the B-24 carried a heavier bomb load and also boasted a higher speed than did the B-17. More than 18,000 Liberators were produced (more than any other U.S. military aircraft in history) and, despite earning a poor reputation in service, they played a significant role in the Allied bombing campaign over Nazi-occupied Europe.

Before Ray left for Europe with his bomb group tragedy struck the Permenter family: in January 1944, Ray's brother, Walter, was killed in a military training plane crash in Deming, New Mexico. He was 20 years old. Ray thus became the family's sole surviving son, signifying that he no longer had to serve in a combat unit; yet he turned down the prospect of a non-combat position to stay with his bomber crew. And this at a time when the Allied bombers and their crews were suffering truly horrendous losses in the European theater of war.

In March 1944, following months of training, the 485th Bomb Group and its four squadrons were deemed fit for combat. The 72 crews of the bomb group flew via Brazil, Dakar (West Africa), and Marrakesh (Morocco), to Tunisia. The group flew practice missions in Tunisia and, by mid-April, began to ferry their planes to Italy, where a special landing field had been constructed from pierced steel planking near the town of Venosa. Combat operations commenced on May 10, 1944, with a mission to bomb a rail marshalling yard at Knin, Yugoslavia. On June 26, 1944, the group garnered a Distinguished Unit Citation for its mission to the Florisdorf oil refinery (one of the oldest oil refineries in Europe) in Vienna, Austria. (The 485 BG would fly its final mission on April 25, 1945; on the bomb group's association page, the list of crew killed in combat (KIA) runs almost 11 pages, single spaced. See 485thbg.org/History/History.html.)

The group's association page records bombing strikes against marshalling yards, oil refineries, bridges, aircraft and ordnance factories, harbor installations, and submarine docks that helped to cripple the German war effort and hasten the end of the war. Through 7 July, the 485 BG had flown a total of 38 missions. In a typical mission profile, the bombers flew at about 20,000 feet in temperatures that plunged to 30 degrees below zero.

Although the precise number is unclear, by July 1944 Staff Sergeant Permenter had flown more than 20 missions, he and his crew (10 men total) having christened their plane the "Lazy Eight." In a letter to a lady friend, he confided that he had returned "shaking" from one mission, noting that "we got shot up pretty bad." While he was credited with shooting down a German fighter on this parlous mission, the German fighter planes "had just kept on coming."

On July 8, 1944, the "Lazy Eight" was one of 29 B-24s that took off from Venosa airfield at 0633 hours. The target was again the Florisdorf oil refinery in Vienna; this heavily-defended refinery, which provided Germany with much of its oil supply, was ringed by numerous anti-aircraft (AA) guns and also protected by fighter aircraft. The weather was clear over the entire approach route to the target and visibility beyond 20 miles.

The bombers organized into two attack units; they then rendezvoused with several other bomber groups and with their P-51 "Mustang" fighter escort without incident. By 1040 hours, 28 planes of 485 BG were over their target (one had dropped out due to propeller problems), where they dropped 69 tons of 500lb. general purpose bombs from 21,700 feet. As stated in an official report: "Bombs were seen to strike short of the target and in target, flames were seen to leap up to 5000 ft. and black smoke up to 10,000 ft."

The report goes on to note that the two attacking formations were exposed to intense and accurate AA fire for about five minutes, while under assault from Bf 109 Messerschmidt and FW 190 Focke-Wolf fighters. Sixteen of the B-24s were "holed" by enemy flak, although damage was assessed as "slight." Three of the bombers, however, were shot down over the target area, apparently victims of the robust and deadly flak.

One of those lost was the "Lazy Eight," which sustained a direct hit that knocked off #4 engine, the plane then going into a spin with its right wing burning. According to eye-witnesses, the pilot had struggled in vain to regain control of the plane but it lost altitude rapidly. No one saw any parachutes. Ray, just 19, and his entire crew perished.

Here's were the story gets a little murky. While details and timeline remain clouded in the "fog of war," it seems that the crew were first buried near the crash site. Shortly thereafter, Austrian civilians moved the remains to a cemetery in Vienna. This makes for a great and poignant irony, because Ray's mother had been born in Austria in 1899 and had lived for a time in Vienna before emigrating to the United States.

By the late 1940s, Ray's (still unidentified) remains had made their way to the military cemetery in St. Avold, France, where they were finally identified through dental records. In the early 1950s, at the family's request, his remains were shipped to the United States and reinterred at Union Cemetery in Bakersfield, next to his brother, Walter. (Special thanks to Ned Permenter, Ray's second cousin, for this information.)

During his short time in the AAF, Ray earned many awards, among them the Purple Heart, Bronze Star, Air Medal with Oak Leaf Cluster for distinguished service, Army Good Conduct Medal, and the Army Presidential Unit Citation.

To honor Ray's sacrifice, East High's football field was dedicated as Permenter Field in a public ceremony on April 7, 1948. A bronze plaque was placed at the foot of the flag pole to commemorate the event.

Many decades have passed since 1948, but Ray's memory remains alive and bright: On April 24, 2010, Ray was again honored in a public ceremony at East Bakersfield High to dedicate the Raymond Permenter Memorial Display in the school's Career Center. "We are here today because of what you did yesterday," averred then Principal Lee Vasquez. Ray's late sister, Barbara Permenter Cady (whose husband helped to liberate the Dachau concentration camp at the end of WWII), also attended the ceremony. "He was a good boy, a good brother," she recalled, "very modest and humble, and I miss him every day." 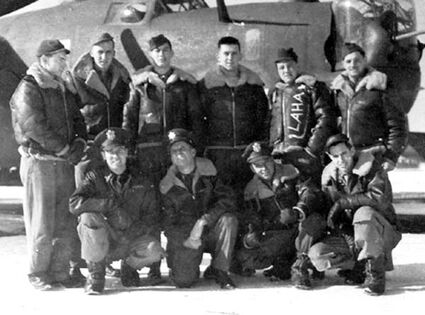 (Note: Originally, there were no lights at Permenter Field. In 1997, lights were added and a large granite marble memorial noting Robert Wheeler Stadium and Permenter Field was placed at the north entrance. At the end of a 38-year coaching career, Ray's cousin, Ned Permenter, was able to realize a long-time family dream when he brought his Foothill High School "Trojans" to play the "Blades" on Permenter Field in 1998.)