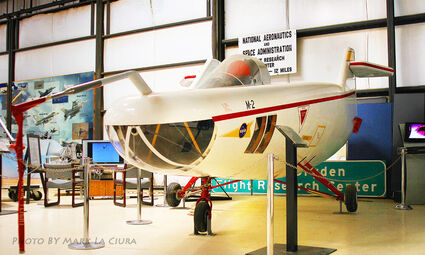 Lots of people that know me know I came to the high desert of California to learn to fly airplanes, sailplanes mostly, and work as aviation photographer at Edwards Air Force Base. Years ago, seated in the front seat of a sailplane, you would not think I would be talking with my flight instructor about hot rod race cars that tow experimental aircraft. His name was Gary Layton, CFIG instructor. Gary worked for NASA as an engineer on many interesting projects.

We talked about many wide-ranging topics. Part of learning to fly is being able to talk, fly the airplane, clear traffic and maintain a safe altitude, to name a few. Lots of flight instructors use this tactic to try and see if you can get distracted. The bottom line you learn is, "fly the airplane in all conditions."

On one of my long-soaring training flights in a sailplane, the topic went to a hot rod race car that NASA used in the 1960s as a tow car. The M2-F1 was the experimental lifting body aircraft auto towed by the hot rod, up to speeds of 140 mph. The lifting body design used in the M2–F1 was eventually used in the space shuttle. The engineers at NASA were working on the concept of landing a spacecraft on a long runway and not having it recovered in a water landing, which was why this lifting body design was important to space flight at that time.

The tow car ended up being a 1963 Pontiac Catalina, the only government owned hot rod convertible at that time. Auto tows have been used for a long time to tow sailplanes to around 1,000 feet above ground. I can tell you auto tows are a blast in a sailplane, having done them myself in my years of flying.

The Pontiac had a 421 cubic inch power plant that was the kind being used on the big NASCAR tracks like Daytona, with a special 4-speed transmission. My flight instructor said it was highly modified to run a consistent 140 mph, but as a result, got real bad gas mileage.

My flight instructor also told a story that people would water ski when the lake bed had water in it during the winter, using this Pontiac like a boat on the lake bed. I cannot confirm any other information on this, but it sure seems doable and I believe it to be true. Gary also said the car had many instruments onboard for air speed that needed to be calibrated on the lake bed and on the highways around Edwards AFB. I believe Gary got a fantastic ride in this hot rod.

The M2-F1 was made for $30,000 and had a mahogany shell, tubular frame, according to NASA's website. The aircraft was sometimes called the flying bathtub and was a low cost way to demonstrate the design. We have to remember this was during the early days of flight testing without the aid of computers.  The M2-F1 had elevons attached to each rudder for roll control and a large flap on the trailing edge for elevator pitch control.

According to NASA's website, the first tests were in March 1963 and on April 5 of that year. They had the nose lift off with Milt Thomson piloting at around 60 mph.

At one point, with the help of famous drag racer Mickey Thompson, the test team replaced the street tires with racing slicks. Using the normal street tires at about 90 mph, the rear tires would start to smoke and break traction on these auto tows with the M2-F1.

My flight instructor said on that flight the M2-F1 only got about 20 feet off the ground, at speeds well over 100 mph, to test out the flight control systems using these auto tows with the Pontiac Catalina. 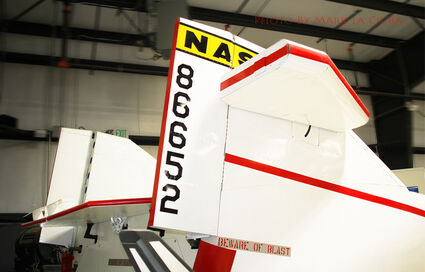 I have always loved the crossover from aviation to auto racing and my flights with my instructor were the best. Gary Layton is not with us anymore and I feel very blessed to have had the flight time with him.

For more information on Lifting Body Aircraft, the M2-F1 or this 1963 Pontiac tow car, go to http://www.NASA.gov.