Some gave all – Memorial Day Ceremony at Mojave Cemetery 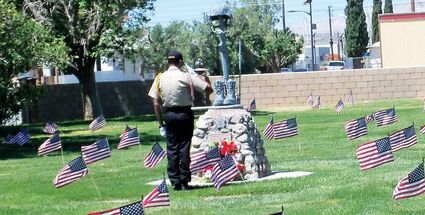 Each year on Memorial Day, Mojave residents gather to honor the men and women who gave their all for our country. Strong winds from the west greeted everyone, but the winds didn't diminish their strong attitudes of patriotism and desire to take time to remember and thank those who died in service to our nation.

Victor Yaw, Chairman East Kern Cemetery District Board of Trustees and U.S. Army veteran of Vietnam, said, "This is not just another 3-day weekend or another day to shop. This is Memorial Day and we remember that our troops are still fighting around the world and they don't get a 3-day weekend to go shopping or have a barbeque."

Yaw thanked Porter Concrete Construction, Tami Kelley and the Mojave High School students who helped place American flags on the graves of 511 veterans in the Mojave Cemetery. As well as James Stokes of Stoken's Donuts in Mojave and Starbucks for refreshments.

Pastor Charles Wallis of Rosamond Assembly of God gave the Invocation. He served as a U.S. Army captain in Desert Storm/Desert Shield and is presently serving as Captain of the Rosamond High School Cadet Corps. The RHS Cadet Corps Color Guard presented the Colors and Tim Lomba, USAF veteran, sang the National Anthem.

Letters were read from Congressman Kevin McCarthy and Assemblyman Tom Lackey by East Kern Cemetery District Manager Paul Holzer. McCarthy's letter stated, "This Memorial Day, and always, we must not just recognize and honor the fallen, but we must strive to live up to their resolve. We should use this as a moment to rededicate ourselves to the noble cause of service and patriotism.

"Our fallen heroes were our neighbors, family members and friends, and though they each had distinctly unique personalities and ambitions, in common they shared a profound love of country and a deep devotion to freedom."

Keynote Speaker William Parkman served in the U.S. Navy from 1968 to 1991 during Vietnam and the Cold War as a Communications Yeoman and raised to the rank of Chief Petty Officer. Mr. Parkman was awarded the Navy Achievement and Commendation Medals for his service.

Mr. Parkman said, "Today is a day to express our thanks and appreciation for those who made the ultimate sacrifice. This includes the rows upon rows of sailors, marines, soldiers, airmen and merchant marines who made this sacrifice in defense of our freedom and way of life.

"In addition, we need to remember those whose earthly body did not return – such as some of the men of the USS Indianapolis (CA-35) Heavy Cruiser. On 30 July 1945, the ship was torpedoed and sank in twelve minutes! Of the 1,195 crewmen aboard, approximately 300 went down with the ship. The remaining 890 faced exposure, dehydration, saltwater poisoning and shark attacks while stranded in the open ocean with few lifeboats and almost no food or water. It was recognized as the greatest loss of life at sea from a single ship, in the history of the U.S. Navy.

"Two torpedoes had hit the Indianapolis, one blew off the bow and one hit at midships, near the powder magazine. The resulting explosion literally split the ship to the keel, knocking out all power and causing her to sink by the bow rapidly.

"Just a few days before the sinking, the ship had delivered internal parts for the atomic bombs at the Island of Tinian. The crew didn't know the cargo they were carrying would finally end the war with Japan.

"The USS Indianapolis, Flagship of the 5th Fleet, had participated in many of the major U.S. Naval battles of World War II, including, Battle of Kwajalein Atoll, Battle of the Western Carolines and the Marianas, and also the Battle of Dutch Harbor in the Aleutians."

Parkman said, "Memorial Day also recognizes and includes the sacrifices made by the living. The children that lost a dad or a mom, the wife or husband who lost the love of their life, the siblings who lost a brother or sister and the veterans that lost members of their units. This day is a day to pass on an education to those that were never taught that the greatness of America comes from the citizen soldiers that serve in the shadows, while only seeking a better life for its people." 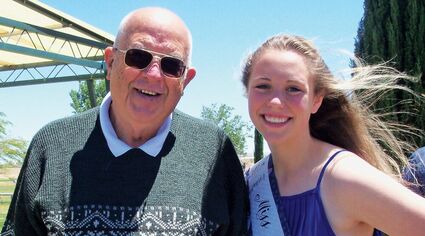 EKCD Manager Paul Holzer recognized and honored Mojave's Gold Star Mother, Hilaria Hannon, with a bouquet of flowers. Hannon's son, Marine Pfc. Fernando Hannon, 19, was killed in an explosion in Al Anbar Province in Iraq in 2004 while serving as a rifleman with the 1st Marine Division. Fernando was the fifth generation of his family to serve in the U.S. military.

Pastor Wallis gave a closing prayer and Tim Lomba led everyone in the singing of God Bless America.