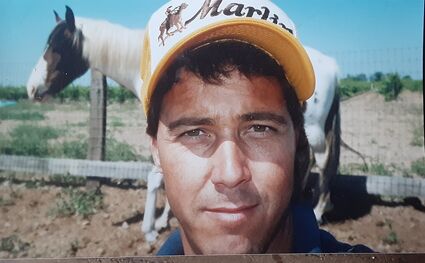 Michael Patrick Martin was born in Santa Monica on June 5, 1958 to Patrick Emmet Martin and Evelyn June Martin. He passed away in Bakersfield's Heart Hospital due to pneumonia. He was almost 62 years old.

His early life was spent in Santa Monica where he attended grade school. The family moved to Selma, California and Michael attended Terry Elementary and went to Selma High, graduating in 1976. He lettered in Cross Country and developed many friends.

After high school, he moved to Nevada and lived on his father's ranch. He honed his skills in using a chain saw and breaking wild horses with his great uncle, Andy. An accident almost claimed his life in 1980 when a tree fell on both of them working in a heavily forested area of the ranch. During this time, Michael entered many rodeos. He earned many championship buckles in the Saddle Bronk Event as well as the dangerous Wild Horse Race and the Chuck Wagon Race.

Traveling to southern California, Michael worked at several ranches in the Santa Ynez and Ramona areas. Settling down in Ramona at Ellison Thoroughbred Race Horses, he learned all manner of the trade; including the medical care of all ages of horses, breeding, breezing, racing, moving and training. He could do anything with a horse.

Michael lived in the Tombstone, Arizona area for several years and had a daughter in 1991. In 1997, he moved to Oxnard, California to help take care of his ailing mother and grandparents in Selma.

In 2001, he bought property in the mountains of Tehachapi, and lived there with his long-time partner until his early departure to join his family in heaven. He is sorely missed.

COVID lockdown prevented gatherings and memorials. Inquiries will be answered by Donna at (805) 607-3696.