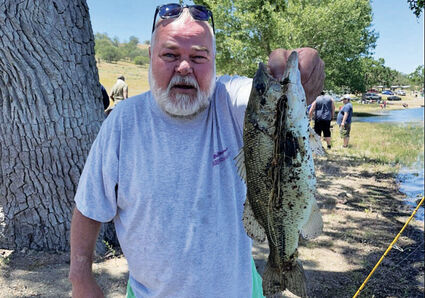 Mike Demike holding up a fish he caught.

COVID-19 has interrupted a lot of plans the past couple of years. The Fishing Derby that usually takes place at Brite Lake has again been cancelled this year. But that hasn't stopped Tehachapi Valley Recreation & Parks District (TVRPD) from providing citizens with events that ensure a good time. This year, Free Fish Day replaced the Fishing Derby.

Before Free Fish Day, which was on May 21, the fish had to be added to the lake. Early in the morning, two days before, a shipment of fish came from the Desert Springs Trout Farm. Around 400 fish were put into the lake, each weighing around 3 to 4 pounds. TVRPD wanted to ensure that the size of the fish being dumped was up to their standards. And they did get some very large fish.

Of course, none of this would have been possible without the help of Steve Shaw. Steve donated $8,000 to put toward the $1,200 worth of fish. Although he did not want his picture taken Steve deserves much appreciation from Tehachapi for contributing so much to help create a fun event for all.

Eventually, with a small audience, all the fish were dumped, and Brite Lake was ready for its event.

The gates opened early in the morning and eventually people started to drive in. The staff, who had begun working at 4 a.m., said they had a good 200-300 people came to enjoy the Free Fish Day event. They enjoyed a nice, peaceful day out next to the water.

There were couples and families picnicking and fishing. Kids ran around. One girl even managed to catch five big fish. The event was a huge success.

The camp hosts at Brite Lake, Joey Mathes and Tamara Mathes, along with the Brite Lake specialist Betsy Priest, were very glad with the turnout. They hope more people come to enjoy the lake, especially since there are still fish waiting to be caught. Only about 30% of the fish are usually caught at these events, so there are still fish galore. 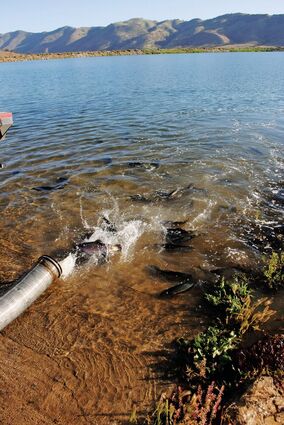 Trout being dumped into Brite Lake two days before the event.

Joey, Tamara and Betsy would like to encourage people to make reservations for Father's Day. Brite Lake is a peaceful area where you can go bird watching, fishing and camp with only the frogs and crickets for noise. The water levels are also the highest they have been in a while. So go check out Brite Lake, 22902 Banducci Rd., for Father's Day to enjoy a peaceful break from your busy life.