Indian Paintbrush: one of the fairest of them all 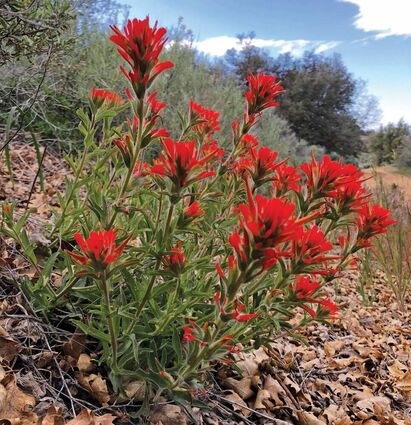 Indian Paintbrush blooming on the Loop Ranch, which is now part of the vast Randall Preserve in the Tehachapi Mountains, owned by The Nature Conservancy.

Among the most beautiful and eye-catching native wildflowers in the Tehachapi Mountains are members of the Castilleja genus, many of them known by a more familiar common name: Indian Paintbrush.

These tend to be upright, feathery flowers in various shades of red, though some are yellow and others appear purple.

Castilleja, pronounced "cass-till-LAY-hah," is a confusing genus of plants, partly because botanists are not in agreement about which members are full species, which are subspecies, etc. When Ernest Twisselmann published his epic Flora of Kern County in 1967, there were considered to be 11 species of Castilleja in Kern County.

In the ensuing years, some of these have been demoted to subspecies, while the Owl's Clovers, which were in an entirely different genus called Orthocarpus, have since been added to Castilleja as additional species.

One of the most interesting things about these feather duster-like flowers is that the plants are hemiparasitic. While they have small leaves and do conduct their own photosynthesis to make food, they send their root-like haustoria down into the roots of host plants like Great Basin Sagebrush, California Buckwheat and others, and obtain water, carbon and nutrients for their own use.

This partial freeloading doesn't seem to be particularly harmful to the host plant, though it does cost them some resources, of course. Castilleja plants can apparently survive without latching onto existing perennials, but they tend not to grow as robustly if left to their own devices.

A quick note about the word hemiparasitic: you can also see Castilleja referred to as "semiparasitic." Why? Because both words mean the same thing. "Semi" is a Latin word meaning half, "Hemi" is a Greek word that also means half, and there is yet a third one, "Demi" which is a French word, and it too means half. And all three are used as prefixes to English words to make them mean half or a partial amount of whatever word to which they are attached.

Many Castilleja species are biennials, which means they germinate from seed one year and grow, flower for the first time the second year, produce seed and then die. Others may be annuals or perennials themselves.

Although many Castilleja species are referred to as some kind of Indian Paintbrush, this is just a descriptive term and there is no evidence that Native people actually used them to apply paint in any way.

Some tribes have found limited uses for a few Castilleja species, but they are potentially toxic and seldom consumed. The Nuwä (Kawaiisu or Southern Paiute) people of the Tehachapi Mountains called Indian Paintbrush by the name agakidübü, pronounced ah-gah-ki-DUB-uh, which basically means "the plant that's red." One species was sometimes used to make a decoction from boiled leaves to serve as a warm wash for sores, but that's about the only known Nuwä use for any Castilleja species.

While most people glance at Indian Paintbrush and assume they're looking at a plant with red flowers, the red parts are actually bracts, or modified leaf parts. The color may even extend to the sepals, which are parts of the flower (sepals are often green and leaf-like) that enclose a developing bud. The flowers themselves are narrow, tubular flowers that are often yellow or pale green and protrude slightly from among the red bracts. These flowers are pollinated by hummingbirds, butterflies and bees, and the red bracts may serve to attract hummingbirds, since insects do not appear to see red, while hummingbirds definitely do.

In addition to being known as Indian Paintbrush, some Castilleja species are called Prairie Fire, because of their distinctive red or orange color and the fact that they may arise in open grasslands.

Castilleja species often spring up in unexpected places, and their startlingly vibrant colors are a pleasure for hikers or attentive drivers to notice and appreciate. They are welcome addition to the tapestry of plants in our area. 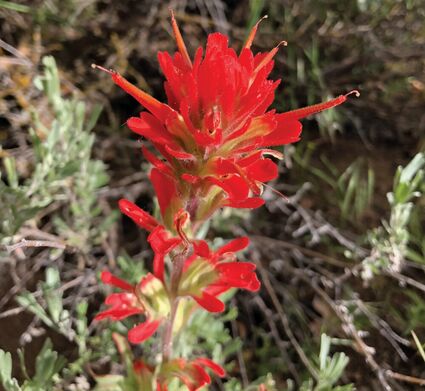 The long, slender protruding structures are the actual flowers – the red parts are bracts, or specialized leaf structures.