A visit to the Edwards AFB Flight Test Museum 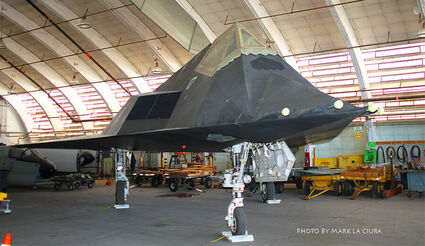 A friend asked me a few weeks ago if I would like to revisit the Edwards AFB Flight Test Museum. These days you have to be retired military or work there to get on base. It ends up my friend Kerry is a former Air force jet mechanic at Edwards and knows the base very well, so on May 12 we got a fantastic tour.

We also had a former FAA pilot and a retired firemen with us on this trek to Edwards. For security reasons, at this time tours at the Edwards Flight Test Museum are not given to the general public.

The highlight of the trip was a special VIP tour by the Museum Director and Curator George B. Welsh to the north base maintenance hangar to see the Lockheed Shooting Star, YF-117 Nighthawk, General Dynamics F-16, the Navy A3D and the X-15 rocket plane mockup aircraft used for display and museum event promotions.

My main focus was the YF-117 Nighthawk (S/N 79-10783) and how the jet ended up at the Edwards AFB Flight Test Museum. After years of being displayed at Blackbird Air Park in Palmdale, it was moved to Edwards over a 2-day relocation trek in order to help to restore the aircraft at the North Base site.

"When this aircraft was initially decommissioned, it was to be placed indoors, but it was located outside, on public display in Blackbird Air Park," according to Edwards Air Force Base.

Over the years, the physical condition of the aircraft had deteriorated considerably due to weather conditions in this area and large amount of bird droppings adding to the deterioration of the aircraft. Cold nights, hot sunny days, rain and high winds have caused the paint to fade and the protective skin coating was deteriorating, so the aircraft was brought back for restoration and to be stored indoors.

By the way, bird droppings are a continuing problem with all the aircraft displayed outdoors at Edwards and Blackbird Airpark. Like the aircraft at the west gate. The century series aircraft are located there. The B-52 Stratofortress "The Buff" also called "Balls 8" at the north gate has this problem of deteriorating paint like on these historic mighty aircraft displayed at Edwards AFB. If anyone's got a fix for these bird issues or wants to volunteer at the museum, please call the Flight Test Museum at (661) 277-8050.

But back to the trek to move the YF-117 – towing speeds were very slow. Only five miles per hour for the move to Edwards AFB. They had clearance problems, in some cases only a foot off each wing tip, making the move very difficult. The YF-117 relocation group task force had escort and security, provided by the California Highway Patrol, up to the Edwards gate.

An interesting side note that we were told on our tour ... the actor/pilot Michael Dorn has an interest in the museum and in aviation. Dorn is an aircraft owner, a Pilots Association member and is an accomplished pilot. He owns a F-104 Starfighter Jet. Welsh said Dorn wants to fly the F-104 to Edwards AFB. Maybe during the upcoming airshow in October 2022.

Dorn is best known for his role as the Klingon Worf in "Star Trek: The Next Generation." He has appeared more times as a regular cast member than any other Star Trek actor, spanning four films and 272 television episodes. He also is known for being a cast member on the TV show "CHIPS" as a California highway patrol officer.

There is a lot to look forward to at the Edwards AFB Flight Test Museum in the future. Thanks very much to George Welsh for the fantastic tour.

The museum's YF-117A (USAF serial number 79-10783, known as 783) is the fourth Full Scale Development (FSD) aircraft. It was delivered on Dec. 5, 1981. Lockheed Pilot Tom Morganfeld flew it for the first time on July 7, 1982. Two functional check flights by Air Force pilots were followed by several weeks of infrared signature measurements. This was followed by integration of avionics for Infrared Acquisition and Designation System trials.

From April 24 to July 23, 1984, 783 was flown against F-14, F-15, F-16 and EF-111A aircraft to collect air-to-air threat analysis data. Afterward, the airplane was used alternatively between low-observable tests and integration of improvements to navigation and weapon delivery systems.

In October 1984, two Navy pilots used 783 to conduct a performance review to evaluate the F-117A for carrier suitability. In March 1989, 783 was officially accepted by the Air Force. In 1998, after being assigned to the 410th Flight Test Squadron, 783 became the first F-117A modified in the Single Configuration Fleet program, a 4-month test series to evaluate an optimized radar-absorbent coating to improve maintainability.

After its retirement, volunteers with the 410th Flight Test Squadron, assigned to Edwards Air Force Base, but based at nearby U.S. Air Force Plant 42, prepared 783 for static display. In doing so, the aircraft had to be slightly modified. The original leading edges, nose assembly, pilot tubes and exhaust were removed and replaced, due to their sensitive technology. Modifications were also made to the cockpit. Aluminum sheet replaced the canopy and sensor glass.