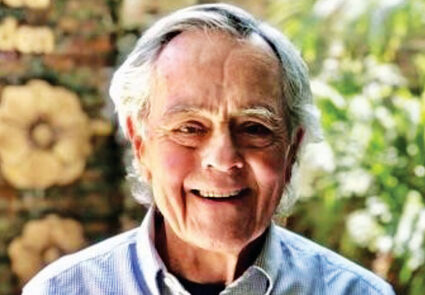 Jim McDaniel will be laid to rest on May 20 at the Bakersfield National Cemetery, in Arvin at 2 p.m., with full Military Honors.

Jim McDaniel was called up to the Lord on December 16, 2021. Jim was a friend to all and a member of the Tehachapi community for 15 years.

Jim was born the day after prohibition ended. His father, Dr. Paul McDaniel, somehow navigated his wife, Dorothy McDaniel past all the wandering people in the city of Chicago and James Denham McDaniel came into this world December 6,1933. Jim grew up in Winnetka, Illinois attending grade school from 1938 to 1948. Jim then attended high school at the Wayland Academy in Beaver Dam, Wisconsin graduating in 1952.

Upon graduation from high school, Jim was accepted and attended Miami University, Oxford, Ohio. Jim was granted a full NROTC scholarship at Miami University from the U.S. Navy. Jim graduated from Miami University in 1956 with a bachelors of arts degree. Upon graduation, Jim was commissioned as an ensign in the U.S. Navy. Jim chose to become a Naval Supply Corps Officer, graduating from Supply Corps School and went on his first cruise serving in the pacific USN 7th fleet, aboard the sea plane tender, USS Pine Island.

Upon returning from his first cruise to San Diego, Jim met Barbara Arend. Jim and Barbara were married in 1958. Jim continued to serve as a supply corps officer with the U.S. Navy for four more years, stationed at NAS North Island, Coronado, California. Jim was honorably discharged as a Lt Commander in 1962. Upon Jim's honorable discharge, he was accepted to the MBA post graduate school at the Miami University in Oxford, Ohio. Jim and Barbara lived in Oxford, Ohio for two years as he completed his MBA degree.

In 1964, Jim and Barbara moved to La Jolla, California. Jim became an investment consultant with Eastman/Dillon. Jim and Barbara settled into La Jolla and started a family. His first son Michael was born in 1965 and second son Douglas adopted in 1969. Jim went on to have a successful investment counselor career, eventually venturing out on his own firm from 1972-1982. In 1983, Jim became a business adviser, helping businesses grow and flourish for another 18 years. Jim semi-retired in 1995 and lived in Tustin, California until 2006. Jim moved to Tehachapi in 2006 to be with his son Douglas until his recent passing in 2021.

James McDaniel was energetic, positive, patriotic and a giving person who did a lot of volunteer/charity for the communities he resided in over his life. Serving on the board of directors for the La Jolla Presbyterian Church and his most cherished service for 18 years with the San Diego City/County Boy Scout organization. Both of Jim's sons are Eagle Scouts.

Jim continued his giving in Tehachapi. He worked with the Tehachapi Men's Prostate Group for 10 years. Jim took immense pride with this group as a prostate cancer survivor. Jim wanted to continuously research and grow the Tehachapi area's knowledge of how to best tackle prostate cancer. Jim's deep local friendships were with this group, and he loved each member. Jim prided himself with his health and was serious about sharing this knowledge.

Jim's legacy stands at, two sons and daughters-in-law; one granddaughter; and five grandsons, all of whom will miss him dearly. However, he would remind us that his body was merely a vessel waiting for his soul to be with the Lord.