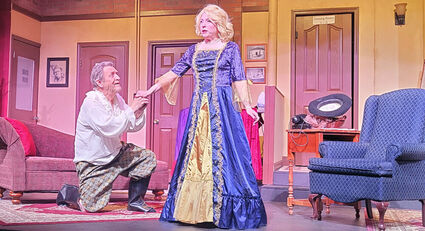 Written by Ken Ludwig, "Moon Over Buffalo" features eight amazing cast members, including crowd favorites: Andi Hicks and Jamie Uhtof. The play is directed by David Strestrum who has expertly timed all the gags and fast-paced action. He had this to say in an interview with Johnna Palmer, "It is one of the funniest plays I have ever seen, heard or read. It is Neil Simon on steroids."

Set in 1950s Buffalo, the play features two expiring Broadway actors: Charlotte Hay and George Hay in their quest to become prominent actors once again. But in a sequence of mistakes, misunderstandings and quick exits and entrances, things go horribly, hilariously wrong.

I was able to attend the debut and interview the crowd at the exit door. Here's what some of them had to say about their first viewing of this hilarious comedy.

After being asked what she thought, Linda Mcdermott replied, "[I] loved the play! It was wonderfully creative and fun. Always surprised at the talent!"

Another show goer said, "I was really just here for my girlfriend, but it was actually a lot funnier than I thought."

And another said "It was really hilariously surprising," While another said, "[I've] never been this entertained."

Jaden Coles came with an amazing review stating, "It was excellent. So rewarding. No one I wouldn't recommend it to."

Finally, Linnet Brown said what all cast members love to hear exclaiming, "Absolutely fabulous. And [I'm] coming again and bringing more with me!"

Throughout the show, laughs echoed around the theater, including mine. The director has done a fabulous job as has the cast. So come enjoy a break from reality, be fabulously entertained and attend TCT's production of "Moon Over Buffalo!"