Run for Roses at Kentucky Derby 2025 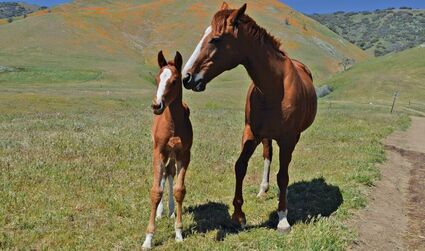 Not many of us have seen a Kentucky Derby winner up close but you may get that chance on Saturday, May 7 at Triassic Winery in Cummings Valley.

From 2 to 4 p.m., a 7-week-old thoroughbred colt, Ride The Curl, and his mother, California Curls, will be at the winery to help celebrate the 148th running of the Kentucky Derby, which takes place at 3:30 p.m.

Now, the Derby is reserved for 3-year old colts and, at 7-weeks old, Ride The Curl is obviously too young. But Managing Partners Shelley Bridges and Peggy Garner of nearby Mountain Springs Ranch are hoping their baby colt will grow up and run in this American Classic in the year 2025.

For those of you who do not know, the Kentucky Derby is run at Churchill Downs Race Track in Louisville, Kentucky each year on the first Saturday in May. The race is run at 1-1/4 miles on a dirt track by mostly 3-year-old colts (fillies do not normally run in this race).

The race is preceded by a series of prep races for 3-year-olds, like the Florida Derby, Santa Anita Derby, Blue Grass Stakes and others. Each of the prep races award points to the top four finishers in the race. The number of points awarded to each horse will determine if he qualifies to run in the Derby. The prep races guarantee a keen competition in accumulating enough points for a horse to run. The field in the Derby usually consists of 20 horses. The Derby is the shining jewel in the Triple Crown race series for 3-year-olds which includes the Preakness and Belmont Stakes. 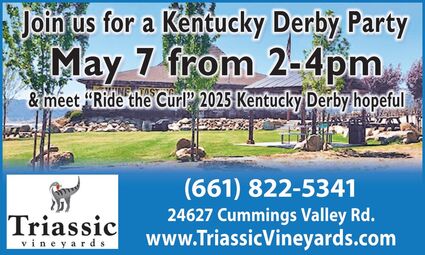 At this point you may wonder what makes Shelley and Peggy so optimistic about a thoroughbred racing future for a 7-week-old colt? Well, in horse racing it's all about the pedigree and Ride The Curl has it. His daddy is Clubhouse Ride who had an excellent career finishing with 1.3 million in earnings. Grandfather Curlin was a huge star. As a 3-year-old in 2007, Curlin won the Preakness States and capped his year off with a win in the most coveted race, the Breeders Cup Classic. He was awarded the title of horse of the year. Curlin finished his career with a then a record of 10.5 million in earnings. So optimism brims eternal at Mountain Springs Ranch.

Drop by Triassic Winery and meet Ride The Curl and his mom, then sip an award-winning glass of Triassic Rocks, a Syrah and Zinfandel blend, while watching the Kentucky Derby.