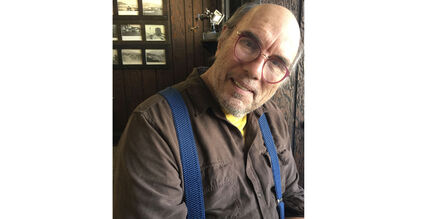 Back in 1997, Gary Mazzola auditioned for the play, "The Odd Couple." He was taken on immediately by the director for that show, the late Royce Cox, and played Oscar, opposite Jerry Mulkins as Felix. That was Gary's first endeavor with the Tehachapi Community Theatre, and he has been active ever since in more acting roles, directing, producing and technically with lights and sound. Gary is a man of many talents.

He played in "The Sunshine Boys," "Guys and Dolls," "One Flew Over the Cuckoo's Nest" (and directed it), "Rocket Man," and "Death of a Salesman." Soon he will be playing Norman Thayer in "On Golden Pond."

As far as his directing career goes, he directed "Little Shop of Horrors," "Young Frankenstein" and "Steel Magnolias" (both times), to name a few. He is also the technical director of the TCT, and has been President of the Board, he figures, 10 times. He has designed and produced most of the posters over the past several years. Gary puts in so much time at the Theatre, and has helped out in a lot of plays.

Drama and the theatre are not his only passions and talents. He has been playing music all his life, and writing songs since he was 16. He became a full time song writer after retirement, and he produces short films and music videos.

Gary also was president of the Arts Coalition of Tehachapi, a group who sponsored concerts in Central Park for several years on Sundays, from June through September. They brought in a large variety of music, with a different group each Sunday. Gary, Jerry Mulkins and Joy Gray formed a group called Full Moon in 1990.

Gary's music group has performed approximately seven concerts at the BeeKay over the years. And he has recorded at least 10 musical albums. They are available on Amazon, iTunes and Spotify. 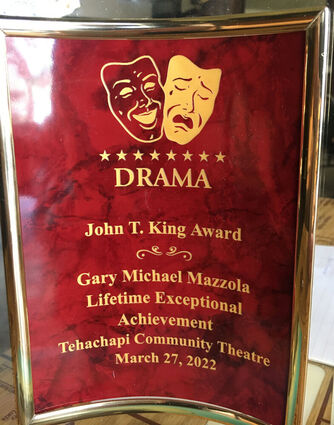 All this while also dealing with Parkinson's Disease. Gary was diagnosed in 2012. He wants us all to know that life doesn't just end if one gets Parkinson's.

Small wonder, then, that Gary Mazzola was awarded the John T. King Award for Lifetime Exceptional Achievement at the March 27 BeeKay Theatre event. Congratulations, Gary! You are most deserving!