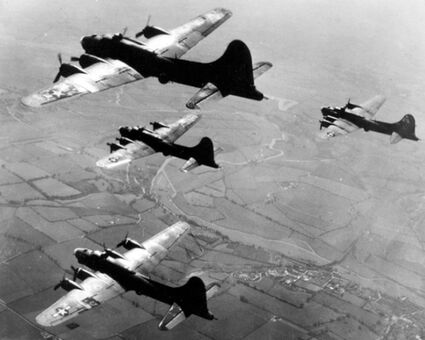 B-17 "Flying Fortresses" over WWII Germany.

(Note: This is the continuation of our 31st article, from our April 2, 2022 issue, in a continuing series about local military veterans and their service to our great country. Articles may contain graphic content and strong language. Reader discretion is advised.

After a year of training in the Army Air Forces as an aerial gunner and radio operator, Stanley had shipped out to England in December 1943. He and his fellow soldiers reached the U.K. some 28 days later, after a harrowing ordeal in the North Atlantic, where their convoy of 125 ships had been struck nightly by German U-boat packs. Sometime in January 1944, they reached their assigned station-an air base near the town of Ipswich in southern England. Shortly thereafter, their B-17 arrived and they began to prepare it for action.)

Stanley and the rest of his crew were soon assigned an aircraft-the pilot christening her "Miss Mischief" to honor his daughter-and began to whip it into shape for combat in the skies over Germany and occupied Europe. (Later, they would receive a second B-17, "Pretty Baby II.") Their first combat mission, in the spring of 1944, was a bone-chilling experience, which Stanley-in his capacity as his plane's ball turret "belly gunner" operating two .50 caliber machine guns-described in copious detail in his memoir:

"Our first combat mission was over the Ruhr Valley to knock out some factories. Boy, you talk about scared-hell, I didn't know the Germans had so many [FW-190] or Me-109 [fighters]. Trying to see through tears and firing on the aircraft didn't make for very accurate shooting. I didn't hit a thing, but I was one scared cookie. We lost one B-17. We took five or six hits-one was pretty bad. We lost a tail gunner on the left side of our aircraft that day. . . When we got back I found out I wasn't the only one crying and scared to death. Out of a hundred men in our group, probably only about 10 guys were experienced.

"Hell, I was ready to quit and go home. I felt this wasn't for me. I wasn't mad at anybody and it wasn't my England. At debriefing, they told us what a good job we had done. Sure-they weren't there. They were in bloody England, drinking tea and eating cookies. This was my first encounter with someone shooting at me with a real gun, and let me tell you, no man living can honestly say he wasn't scared. Man, all you could see were aircraft going over, under and around you, shooting, trying to knock you out of the sky. One Me-109 came in a little too close and our tail gunner nailed him. You should have seen that bird blow its engine. Darn near hit our aircraft."

The Germans were aware that B-17s, lots of them, were now stationed at the airfield near Ipswich. Thus, they conducted regular night raids, destroying some of the bombers and damaging runways. The German bombers also resorted to an effective ruse de guerre: "I'll tell you how sneaky they were. One night we were coming back from a mission. It was dark, so no sign of the air base until we were right over it; then the ground [personnel] would turn on the runway lights and we would come in. This night, [the Germans] flew two of their bombers in our same flight. When we turned the runway lights on, these birds started their bomb run on our field. You talk about commotion. Hell!! . . . And this happened quite often when we returned from night missions."

In his memoir, Stanley described another mission still etched indelibly in his mind: "We made a leaflet run. We were hit the whole way back from Paris to the English Channel-three engines knocked out. The pilot wanted to bail out, but we were over the English Channel and the water was about 38 degrees, so the crew elected to ride it out. We started throwing everything that wasn't nailed down out of the plane. Guns, radio equipment-anything that would lighten our load. We had about half the English Channel to cross and we needed altitude.

"We came in at Manson, England-just above the roof tops and landed in a field outside of town without landing gear. When that plane hit the ground you never saw so many guys diving out of an aircraft. Boy, were we scared-afraid of fire. The last guy out was the pilot and he laughed like hell when he saw all of us crawling out of muddy water and other junk that was there. The townspeople came running across the field to see if they could help. We told them everybody was out and there might be a fire, so to stay away from the plane."

Stanley, and his no doubt badly rattled crew members, were shepherded into town, where they sang "Yankee songs" and slugged down beer until British Military Police hauled them off to one of their camps a few miles away. In short order, the men were scooped up by U.S. MPs; they were then unceremoniously doused with the synthetic insecticide DDT, "because we all had bugs, lice, and everything else you could pick up in Britain."

After that mission from hell, Stanley and his crew received three-day passes to London. Because the hotels were fully occupied, the men-no doubt accustomed to "roughing it" by now-slept in the subway, or the "tube" as it was affectionately known to the locals. "Man, everybody in London slept there. All you heard were bombs and sirens all night long, so we decided the hell with this-it is safer back at the base. So we headed for Ipswich and home." (Note: Stanley is most likely referring here to the "Baby Blitz" [officially Operation Steinbock], a Luftwaffe bombing offensive over southern England that lasted from January to May 1944.)

Returning to Ipswich, Stanley and his crew boarded a DC-3 for Belfast, Ireland, where they picked up their new bomber (this must have been "Pretty Baby II"). The plane, Stanley and the rest of the crew learned, no doubt to some surprise, had been ferried from the U.S. across the North Atlantic to Ireland by female ferry pilots. (Note: In fact, these women pilots who ferried the bombers to England helped to chart post-war commercial airline routes.)

Back at base and ready for new assignments (it was now sometime shortly before June 6, 1944, and the D-Day invasion), the first bombing run in the new B-17 was over Aachen, Germany. Fortunately, with excellent cover provided by their P-47 escorts, and despite encounters with a few German fighters, this turned out to be a routine mission-albeit one with the typical high degree of tension.

And the tension, that often unbearable tension, never released its grip on the extraordinarily brave men of our bomber crews: "We had been hearing rumors about a big strike and we all figured Berlin, but like other rumors we ended up going to Hamburg [one of Germany's most important and best defended cities]-shitty flight. More damn fighters and flak than we had ever encountered. Could have gotten out and walked on all the damn metal that was flying about. It was one of those cry, shoot, and wonder if you're ever going to get home again. More damn talking than I ever heard in my life. First-bogie on the left at 9 o'clock! Bogie coming up at 6 o'clock! Hell, I knew where the bogies were-I was trying to shoot 'em. Finally got credit for a 'kill' coming in at 9 o'clock. I couldn't even tell you what kind of fighter it was. Too scared. I must have had more brass around my feet than we had at the foundry at the mill where I worked as a kid." Stanley shared another "kill" with the turret gunner on this frightful mission, but the crew lost another tail gunner, just a "young kid" who had come on board some two months earlier.

The Hamburg mission had been Stanley's ninth mission overall, and he wished it had been his last. "By this time," he recalled, "I was always scared-didn't know what was going to happen [to me]. I had three really bad [missions] that made me think I would never see tomorrow, but somehow I got through it."

His 10th mission was also tough, as, once again, "Pretty Baby II," along with many supporting B-17s, was to bomb a large, well-protected city in Hitler's tottering-albeit still highly lethal-Third Reich. The city this time was Hanover. "[We were to] bomb the rail lines and whatever else we could hit. We had been flying with another squadron group, because we had lost too many planes and didn't have a full complement of aircraft. We encountered lots of flak [but] few [enemy fighters]. We lost three planes on that mission, one of ours and two of the other squadrons." 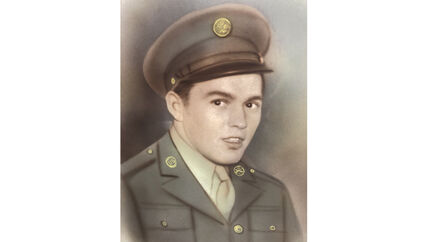 D-Day, the impending invasion of France, was now bearing down on everyone, once again ratcheting up the level of tension for airmen and soldiers alike. And the buildup of forces for the cross-channel attack was hardly a secret. Writes Stanley: "Ike [General Dwight D. Eisenhower, Supreme Commander of Allied Forces in Europe] was getting ready for D-Day and more troops were being amassed around Southampton. Hell, I don't know why the Germans didn't know this. We saw it. Today was Flight #11 and none of us knew it was going to be our last flight. It was off to Bremen [to hit a rail yard] and crap that I couldn't see. When we landed, at our debriefing we were told that our outfit was being disbanded and we would be assigned to other units."

(Note: Part Three will address Stanley's sudden assignment to an infantry division, which took part in the Battle of the Bulge; and his post-war struggle to support his family, which would fortunately have a happy ending.)